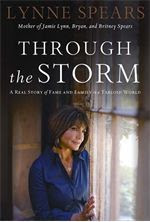 Mothering Britney and Jamie Lynn Spears Through Fame and the Tabloids

By Lauren Yarger
What’s it like to be the mother of pop’s biggest singing star? Lynne Spears, mother of Britney and Jamie Lynn Spears, says it’s very much like the life any mother has – and very different.

In “Through the Storm: A Real Story of Fame and Family in a Tabloid World” (Thomas Nelson 2008), co-written with Lorilee Craker, Spears shares memories, personal experiences, photos and poetry to recount background and perspective on the “windstorm” of fame that blew through her and her family’s life.

Most of the first part of the book deals with Spears' own upbringing and the influence of her father, a farmer, and her mother, a war bride from London trying to adjust to life in rural Louisiana. She marries young and tries for years to make that marriage work before it finally succumbs to the stresses of her husband’s alcohol and abuse.

Fame is the last thing the family expects when Britney starts competing in local talent and beauty pageants, a world of backstabbing stage mothers and little children trained in the talent of intimidation. Many criticized Spears for encouraging her daughter in this type of environment, but from the mother’s perspective, all she was doing was helping her child pursue a dream, like any other mother attends sporting events, for example, she says. That was just the first time people thought badly of her as a mother, confides Spears, who later was dragged through the tabloids along with her daughters.

After Britney lands a role on the “Mickey Mouse Club,” she suddenly finds herself in the spotlight and the subsequent, almost overnight fame when her first album “Baby One More Time” hit the charts at number one, is too blinding. She and first love Justin Timberlake split, she annuls a marriage, apparently after the couple sobers up, and then three months later marries Kevin Federline, with whom she quickly has two children. When they split, there are custody disputes following Britney’s apparent mental lapses (the shaving of her head) and substance abuse. Her mother suffers through estrangement from her daughter while watching her turn to a jet-set lifestyle full of parties to numb her pain and watches her daughter’s faith shatter.

Meanwhile, the littlest Spears, Jamie Lynn, also finds fame on television shows “All That” and “Zoey 101.” The teenager ends up pregnant just at the height of Britney’s collapse. Despite Spears’ constant claims that she didn’t realize something would happen or that someone’s intentions weren’t pure, the reader has to ask, “Is anyone really this naïve?” A photographer asking to shoot the young Britney in her bedroom, alone, didn’t raise red flags?

We can’t fail, however, to feel her pain as she describes being torn between trying to be in two places at once to help both of her daughters, both in practically life-or-death situations. Really riveting is the description of Spears attempts to free Britney from the control of her manager, Sam Lufti, who isolates the star and has her committed to a mental institution, and against whom, Britney receives a restraining order with Spears’ help.

Contending with the tabloids, who trash the family’s reputation and make up stories when they can’t get Spears to divulged gossip to journalists posing as friends or by digging through her trash, Spears hangs on to the support of several close friends and her faith in the Lord, which seems genuine and deeply rooted.

Her hope in writing the book is that mothers might be able to learn from her experiences and use what she has learned to better raise their kids. And there’s plenty of good advice throughout, because the love a mother feel for her child is universal, whether or not the child becomes famous.

You can purchase “Through the Storm” here.

Posted by LaurenYarger at 2:20 PM
Email ThisBlogThis!Share to TwitterShare to FacebookShare to Pinterest