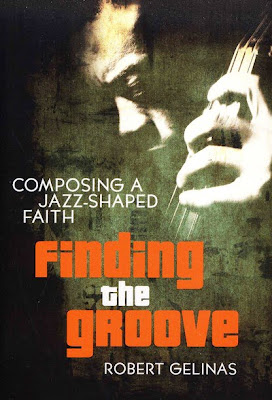 By Jerry Starks
“Finding the Groove” by Robert Gelinas (Zondervan, 2009) is a deep and multi-faceted exploration of the Christian life and jazz. The subtitle entices you with another clue about where Gelinas is heading: “composing a jazz-shaped faith.”

This intrigued me on two levels, because I had assumed that jazz wasn’t really composed– it was more improvised. That also seems to be many people’s style of life– improvisation more than planning. As I read further, I became very engrossed in his thoughtful observations about jazz and Christianity.

Gelinas is not a musician; he is a pastor and a jazz theologian. He explains that jazz is bigger than just music: it can be an entire lifestyle (not just the improvisational aspect), and a very Christian lifestyle at that. “Christian” not just by putting different labels on things but by using patterns and behaviors developed in jazz music when we interact with God and with our fellow humans. Even the history and development of jazz should ring with familiarity in Christian ears. Jazz was developed by African-Americans: people not free living in a free land—just as we were all born slaves of sin living in a fallen world. Yet even in the midst of deep segregation, jazz became a meeting ground where races could actually enjoy the same thing at the same time in the same place—just as in Jesus there is neither Jew nor Greek, bond nor slave.

Three cornerstones of jazz form a framework for Gelinas’ exploration. They are syncopation, improvisation, and call-and-response. He explains how each works in jazz music, then gives examples of how they can work outside of music, often giving examples from Scripture.

This would have been encouraging and enlightening by itself, but Gelinas keeps on going. He discusses jazz greats in many areas of life, such as John Coltrane, a saxophonist, Langston Hughes, a poet, Ralph Ellison, a novelist, Martin Luther King, Jr., a preacher. Each of them was influenced by jazz, and each made significant contributions to America. The depth and scope of Gelinas’ understanding of jazz and American culture is deeply satisfying.

Chapter headings include “Creative Tension,” “Life in Concert,” “Finding Your Voice,” and “Developing Your Ear.” All of them have a musical basis, but all of them go far beyond that art form the just like jazz cannot be restricted to a concert hall: it gets into all of life. In the same way, insists Gelinas, the love of Jesus should break out of our familiar constructs and pulse with life, causing others to stop and listen. One way of doing that is to compose and live a jazz-shaped faith.

You can purchase this book here.
Jerry Starks is associate director of Masterwork Productions, Inc. and has numerous acting and directing credits in both secular and Christian productions. He resides in Essex Junction, VT where he is active in the arts ministry at his church.
Posted by LaurenYarger at 8:35 AM
Email ThisBlogThis!Share to TwitterShare to FacebookShare to Pinterest