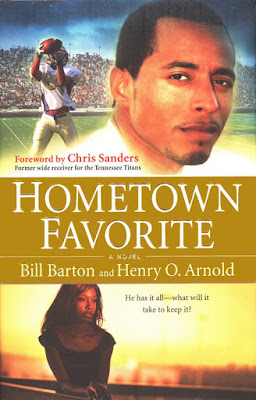 A Little Hard to Believe, Maybe, but Enjoyable
By Terry Robins
Dewayne Jobe is a small-town football star who rises above his background to become one of America's finest and most popular players in the NFL in "Hometown Favorite" by Bill Barton and Henry O. Arnold (Revell, September 2008). His glory is short-lived when family circumstances take control of his life and turn it into a nightmare. Top that off with a sudden onset of physical disaster, and the downward spiral is complete.

Readers who aren't huge football fans and knowledgeable of its terminology and jargon might be tempted to give up trying to slog through description after description of play by plays, but if you can persevere and get to the meat of the story it becomes more gripping.

Jobe's story is one of tenacious faith not only in God, but in the human spirit as well. He holds onto this faith through seemingly insurmountable odds, and with the help and support of a surprising friend, pulls himself out of the pit that becomes his life.

There are times in this story of hard luck and sad circumstances that it becomes a little difficult to believe that all the people who surround Jobe are instantaneously certain of his guilt. They never give him the benefit of the doubt, even when they are all aware that there is an evil element living within their family circle who is much more capable of the horrible deeds that transpire. The credulity of the story is also weakened by the total, unrelenting loss and disaster that strikes him all at once. It just seems that in the effort to create this picture of utter hopelessness the writer goes one step too far.

Readers looking for a pretty easy read and who can stand the horrific events that lead this character on his faith-testing journey will enjoy finding out the fate of Dewayne Jobe, however. By the way, anyone notice the similarity of this story line to the story of another guy named Job?
Find more information or buy the book here.

Terry Robins is a retired middle school teacher and serves at her church in the Kansas City area running its drama ministry and cafe and resource center. She has three daughters and four grand children.

Posted by LaurenYarger at 9:37 AM
Email ThisBlogThis!Share to TwitterShare to FacebookShare to Pinterest