Review: Called Out of Darkness: A Spiritual Confession by Anne Rice 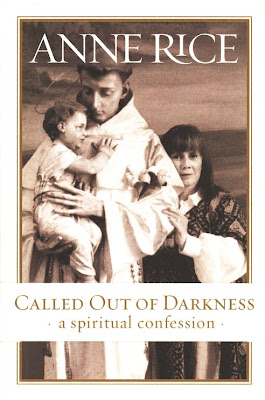 An Atheist Loses Faith and Returns to God
By Lauren Yarger
She grew up Catholic, wanting to be a nun, then turned away from the church and God to live as an atheist for 38 years until she found her faith again.

“Called Out of Darkness: A Spiritual Confession,” (Knopf 2008) is an honest, vulnerable account of Anne Rice’s spiritual journey, which, the author tells us, is cloaked in the plots and themes of her wildly popular Vampire Chronicles series featuring Lestat, among others. (Lestat was featured in a short-lived musical on Broadway with music by Elton John and in a film starring Tom Cruise).

Rice recounts her sheltered childhood, attending mass every day in New Orleans with dreams of joining the sisterhood and becoming a saint. Virtually isolated from the outside world through high school, Rice never quite fits in with children her own age, yet doesn’t belong in the world of the adults around her. It’s only after she copes with her mother’s alcohol-related death and goes off to college that Rice realizes there is a whole world of information and experience which she has yet to explore.

She begins to question what she feels are “anti-art, anti-mind” teachings of the church, especially when she meets people she likes who are good people, making their own decisions and not governed by the Catholic Church, or any church for that matter. A priest tells her she’ll never find anything but misery outside of the Catholic Church and that’s a defining moment for Rice. She departs “no longer a Catholic.”

Once she leaves the church, she leaves God too, because for her, the two are inseparable. She stops talking to God and looking to him for help. “Interview With the Vampire,” written following the death of her young daughter, is a lament to her lost faith, Rice says. Some 21 other books follow during her atheist years, all with characters who struggle to find meaning and good and evil in the atheistic world in which they live as outcasts. Researching those characters and studying ancient history lays the foundation for her return to faith, though she clings to her atheism with “a martyr’s determination” because she believes it to be true. When she finally loses her faith in the non-existence of God, she returns to the Catholic Church, different since the pre-Vatican II days of her youth, and finds God in a personal way.

The autobiography is revealing, if tedious at times. The first 120 or so pages deal with her childhood in minute detail, and while this might be of great interest to the fans who have come to love Rice after years of reading her novels, it proves superfluous for someone wanting the bottom line of what turned her off and then back onto God. A tendency to lead the reader to the edge of expectation and then say, “but wait, let me go back first” proves a little wearying as well, but overall, the blessing of Rice’s experience is worth the read. She feels that her writing now is for God and she’s written about the life of Jesus in her “Christ the Lord novels, “Out of Egypt” and “The Road to Cana.” “Angel Time,” the first in a series of metaphysical thrillers in a new “Songs of the Seraphim” series, is due out in October.

For more information on Anne Rice go to http://www.annerice.com.

Posted by LaurenYarger at 8:20 PM
Email ThisBlogThis!Share to TwitterShare to FacebookShare to Pinterest

Thanks for the review. I find Ms. Rice's faith journey fascinating and enjoyed reading "Christ the Lord".
February 3, 2009 3:25 PM

I'd heard that Mrs. Rice was going to add one more vampire book to her legacy, writing as a Christian instead of an atheist. I did so look forward to this since I am an author who is a Christian and writes fiction surrounding vampire and werewolf lore myself. However, I now understand she's put any thought of another vampire book aside.