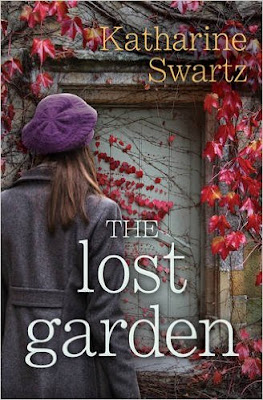 Two stories set a century apart intertwine in Katharine Swatrz's "The Lost Garden," the second book in her Tales from Goswell series. In the present, Marin Ellis assumes guardianship of her younger half-sister, Rebecca after the death of their father and Rebecca's mother. Unsure what direction to take in her own life, Marin yields to Rebecca's plea to give them a fresh start by purchasing Bower House, a former vicarage in England's West Cumberland. A locked door to an apparent lost garden intrigues the sisters and they are enveloped by its history.

Meanwhile, the garden's origins and the post-World-War-I lives of the home's previous inhabitants, Eleanor Sanderson, the vicar's daughter and her sister, Katherine unfold as men return from battle and people try to resume their lives. The two tales skillfully are shared intermittently with every other chapter so that the stories unfold simultaneously, but without the jarring that sometimes can occur when the timeline shifts in novels. We also don't get a chance to forget what is happening in one story before moving on to the second.

Similarities surface in the stories as we see how the sisters learn to relate to each other and to the other people in their lives. Marin and Eleanor also have father/daughter issues to work through as well as how to work through grief. And of course there is some romance. The stories are fairly predictable, but in a pleasant way. I hadn't read the first book -- this sequel stands on its own -- but I had been drawn to the book because of its "secret garden" plot.  I wasn't disappointed. The book impressed me with its well written dialogue, often using vernacular, and Swartz's strong descriptive style with metaphor that puts us in the setting and gives clear understanding of what the characters are experiencing.

A nice example:
"Carefully she lifted her skirt and moved through the garden. She had never walked the full length of the place, and now she studied the old slate path that had been buried under the soil and which Jack had scraped clean. He'd shown her the path when he'd first cleared it . . . and Elanor had studied them scrupulously, simply to have a moment alone with Jack."

Touches of faith add to the characters, but are not overbearing. Makes me want to go read the first novel, The Vicar's Wife, also dual stories separated by decades.
-- Lauren Yarger

A copy of the book was provided free by the publisher at my request.

Posted by LaurenYarger at 2:16 PM
Email ThisBlogThis!Share to TwitterShare to FacebookShare to Pinterest

Big fan of Katharine Swartz, she doesn't make religion explicit but gives a great sense of Christian community living by depicting realistic characters who happen to be Christians.

Big fan of Katharine Swartz, she doesn't make religion explicit but gives a great depiction of Christian community living by creating realistic likable characters that happen to be Christian.