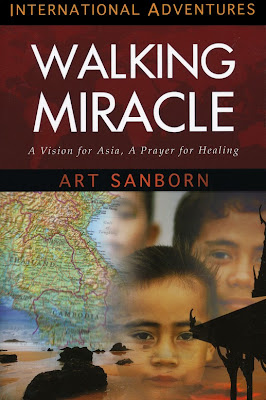 By Terry Robins
On the title page of the review copy I received of “Walking Miracle: A Vision for Asia, a Prayer for Healing” by Art Sanborn (YWAM, 2007) is a handwritten message from the author who was told he would be a paraplegic and would never walk or use his hands again. The message is simply this: Philippians 4:13, Blessings, Art Sanborn.

Sanborn's entire life has been built on the foundation of this scripture, and he lives it daily, instills it in his family (wife Ellen and son David have written a number of Christian musicals, the latest of which, David, had a run in New York and was guest reviewed by Rich Swingle here). He has seen countless miracles in his life as a result.

After having spent his entire life as a missionary in different countries like Taiwan and India, Sanborn had indeed seen miracle after miracle in his travels and missions work around the world. He exhibited an unshakable faith seen in few people, and this faith carried him through desperate and sometimes frightening situations that seemed impossible to overcome.

The book contains so many examples of miracles that can’t be simple coincidences that sometimes, if you didn’t know better, it reads more like it must be a novel, not an actual account of one endlessly faithful, humble man's life. Once, for example, the family needed money in the amount of $3,389.23 for air fare to get back to Thailand, and there was seemingly no way to obtain it from an offering that usually averaged $800. After the service that evening that exact amount was collected.

The incidents go on and on in country after country: amazing stories of how he and his family prayed through situations that most people would have given up on. This is a book that gives inspiration while at the same time finding humor in the hardships he endures both before and after his accident. Stories of how he mixed up words while trying to learn all the different languages he needed for his mission work cause out-loud laughter. Throughout his life he never wavers in his faith, depending totally on God to see him through whatever happens and praising Him when He does.

The title comes from the accident, where Sanborn was slammed into the bottom of the ocean one day while surfing in Hawaii, and was told that he would never walk again after sustaining a broken neck and a severed spinal cord. Sanborn's reply to his being told to get used to that idea was, "...I've seen lots of miracles in my lifetime....If God wants me to walk again, I will walk again."

Sanborn is definitely a walking miracle, and though the title of the book might refer to the author himself specifically after his accident, a case could be made that his entire life was one walking miracle after another.

You can purchase this book here:
Posted by LaurenYarger at 10:36 AM
Email ThisBlogThis!Share to TwitterShare to FacebookShare to Pinterest