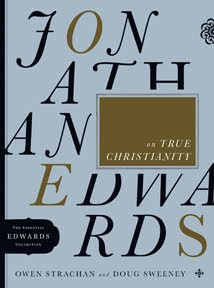 Jonathan Edwards Stands the Test of Time; Do We Stand the Test of True Christianity?
By Lauren Yarger
There’s nothing like a good dose of Jonathan Edwards, the 18th century New England preacher who made sermons like “Sinners in the Hands of an Angry God” famous and helped propel the Great Awakening period in the United States, to get you back on track spiritually.

I sampled the latter title, assuming that it would have current application given the confusion that can occur these days when someone defines a Christian. I was right. Edwards, with the help of authors Owen Strachan and Doug Sweeney, speaks to the reader about what it means to really be Christians and even though some 300 years have passed since the preacher voiced his thoughts from his Northampton, MA pulpit, we still need to hear what he has to say.

“Many … people are likely in evangelical churches that ostensibly teach biblical doctrine, and yet they hold views on various spiritual and moral subjects that directly conflict with the biblical witness. If their beliefs conflict with true Christianity, it is likely that their lives conflict as well,” the authors write.

This same concern is voiced by Edwards in writings, reprinted, followed by a discussion of pertinent points. It’s a nice combination which gives the essence of Edwards’ thoughts without asking the reader to digest a whole sermon. The authors come off a little preachy, but concerned, and most of what they say is rater convicting, just as Edwards is.

My favorite section was entitled “The Marks of True Conversion.” It’s a great way to ask yourself some pointed questions about just how seriously you take your faith.

His “marks” of a true Christian conversion include:
 An increased esteem for Jesus. He becomes Messiah, not just someone who lived a long time ago who was a good teacher.
 Hatred of sin. No more excuses for behaving contrary to God’s will.
 Love of the Word. It’s not just a book. It’s the actual word of God.
 Love for truth and the things of God. Abiding in Him.
 Love for believers. This should be overflowing and is lacking in many congregations today, the authors lament.

The truth of Edwards’ words is a challenge to take our commitment to a new level.

“… many professing Christians are floundering, “ Strachan and Sweeney write. “They know basically nothing about the bible or Christianity, they struggle to attend church, they hold beliefs in direct contradiction to the Scripture, and they neither witness nor have even the most basic success in educating their children in the things of God.”

It’s a call to get serious.

Information about the series “Jonathan Edwards on True Christianity” can be found here. Just input the title into the search. You can purchase the books on this site as well.

A free reviewer's copy of this book was provided by Pure Publicity.

Posted by LaurenYarger at 8:33 PM
Email ThisBlogThis!Share to TwitterShare to FacebookShare to Pinterest