Book Review: Take One, Above The Line Series #1 by Karen Kingsbury 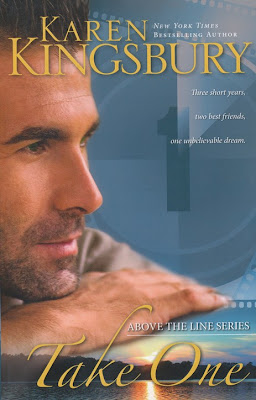 New Beginnings in a Comfortable Setting
By Jerry Starks
New Beginnings, or First Times, could be the subtitle of Karen Kingsbury’s novel “Take One, Above The Line Series #1” which follows the efforts of two Christian movie makers to complete their film.

Chase Ryan and his friend Keith Ellison are going to make a movie. Neither is new to the movie industry, but this is their first venture without any studio backing. They’ve got $2 million dollars with which to make their movie, not very much by Hollywood standards. Chase’s wife is very worried about personal financial ruin if the project doesn’t succeed.

Keith Ellison has immense faith that this project will succeed, but he has concerns too, about his only daughter, Andi, a freshman at Indiana University. She was raised in Indonesia where the Ellisons and the Ryans were missionaries and the Ellisons are rightly worried that their daughter’s sheltered upbringing has not prepared her for the American college scene.

Andi’s roommate is Bailey Flanigan, also a drama major and also a Christian. Their relationship of getting to know one another, then dealing with jealousy over roles and boyfriends is one of the best aspects of this book.

The movie is plagued with a reasonable set of road-blocks: equipment failure, a prima donna star, a stigma about working on a “Christian” film, and finally trouble with a union which stops production for three days. Also, the playboy teen idol makes moves on Andi (her first kiss – another First Time), and the prima donna vamps Chase, who is on-site away from wife and family. And, of course, money is running out rapidly.

While any art must condense time and situations to avoid rambling, it was hard to believe that many problems encountered by the movie production are resolved once and then never came back. Most problems in life require more than one gentle answer. The final resolution also seemed very generous, although it certainly makes it easier for Kingsbury to continue the series and focus on other issues.

With only a few rough edges in Kingsbury’s world, it is a very comfortable place to live. On the other hand, it’s commendable that she presents Christian approaches to both relational problems and vocational problems. It has become too common in American culture to be cynical, and I applaud Kingsbury for displaying characters who act out faith in God’s principles.

To purchase this book, visit http://tinyurl.com/dcyoja.

Jerry Starks is associate director of Masterwork Productions, Inc. and has numerous acting and directing credits in both secular and Christian productions. He resides in Essex Junction, VT where he is active in the arts ministry at his church.
Posted by LaurenYarger at 6:30 AM
Email ThisBlogThis!Share to TwitterShare to FacebookShare to Pinterest