Book Review: A Million Miles in a Thousand Years by Donald Miller 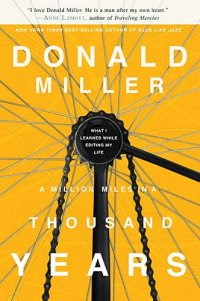 Lessons Learned from an Edited Life
By Lauren Yarger
Donald Miller isn’t an easy man to get to know. In fact, he doesn’t seem to know himself all that well, which is the premise for his latest book, “A Million Miles in a Thousand Years: What I Learned While Editing My Life" (Thomas Nelson, 2009).

Miller, who catapulted to fame with his best selling “Blue Like Jazz,” found his life had stalled. He was avoiding his publisher and deadlines while pondering the meaning of life when two filmmakers, Steve Taylor and Ben Pearson (“The Second Chance”) contacted Miller about adapting “Blue Like Jazz” into a movie.

The three begin to transform the “Don” of the book into a more film-friendly and easier-to-know character, and in the process, Miller discovers that his life is really, rather boring on the surface. He tries to create scenes for the character by remembering significant moments, and finds he has forgotten a lot and events that he does remember don’t lend themselves to great cinematography. He starts living new stories to create a character, including attempting a reconciliation with the father whom he barely remembers, and ends up writing a new life story.

What seems at first ramblings by a guy who is having trouble finding something worthwhile about his life to report to a God portrayed as impersonal and not inclined to let humans in on what their life’s purpose is anyway, shifts and becomes a rather thoughtful collection of insights into what’s important and how we can shape our lies into better stories.

I particularly enjoyed the format of the book, which follows Miller’s attempts to structure his life like a screenplay. Exposition is followed by chapters breaking down the overall premise driving any story plot: a character who wants something and who overcomes conflict to get it. Being a writer, I could relate to this approach to life and the format made Miller’s experiences and stories far more interesting.

In fiction, characters often take on a life of their own and write a story quite different from the one the author sets out to pen. So it is with life, Miller discovers, as characters write their own stories, despite what God, the author, might have had in mind.

“I told God no again, but he came back to me and asked me if I really believed he could write a better story – and if I did, why didn’t I trust him.”

It’s this kind of deep philosophical thought mixed with dry humor that propels “A Million Miles.” Despite an underlying sadness you can’t help feel comes from the author’s belief that he doesn’t know God as well personally as he’d like to or should, the book is a thoughtful exploration of developing a meaningful life.

You can download some sample chapters here. For more information or to purchase the book, click here.
Posted by LaurenYarger at 10:42 PM
Email ThisBlogThis!Share to TwitterShare to FacebookShare to Pinterest