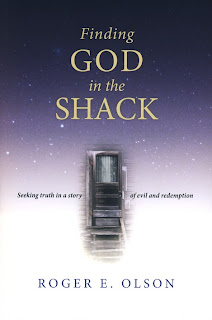 An In-Depth Look at a Publishing Phenomenon

At first glance, “Finding God in the Shack” by Roger E. Olson (2009 Intervarsity Press) appeared to be an over reaction to William Paul Young’s controversial novel “The Shack.” The book has drawn criticism from some Christians because of its depiction of God as a woman (well, two women and Jesus, actually) and because of some references that some have taken to mean that the God in the book suggests you don’t have to be a Christian to be saved.

Upon closer examination, however, I found this study a helpful guide as Olson looks for “truth in a story of evil and redemption.”

Because “The Shack” may appeal to people seeking answers, but who don’t have a foundation in the Word, Olson’s study is at once a guide for the seekers and a reference manual for Christians who might be helping them in their search.

Olson highlights each theological point raised in “The Shack” and expands on it from a biblical perspective. His emphasis is on finding the positive aspects of God as depicted in the novel and helping people “develop a relational view of God as defined by Jesus Christ – loving, forgiving, compassionate and merciful.” A handy study guide with questions is included at the end of the book.

“Finding God in the Shack” would be a great companion to a book discussion group in your neighborhood or church.

--Lauren Yarger
Posted by LaurenYarger at 9:51 PM
Email ThisBlogThis!Share to TwitterShare to FacebookShare to Pinterest

Books that contain heresies or untruths, can still have much truth in it that can benefit people. The main problem, however, is sometimes a reader doesn't successfully distinguish between the two and can be led astray by the errors.

I prayed and did my best to make sure that my novel didn't contain anything of that sort. I know how much some christian fiction authors feel concerned by this too.