Things You Should Know About 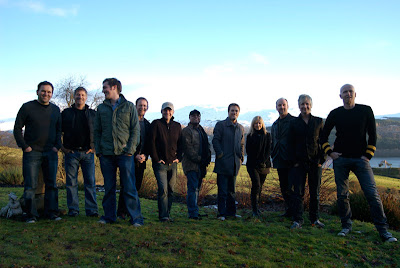 Exciting things are happening for Christians in the Arts. Here a few highlights:
· The Compassionart songwriters (pictured above) composed 18 songs from which the royalties will be used to alleviate suffering worldwide. Funds now are being raised to record a CD. For more information, go to http://www.compassionart.co.uk/.
· Christian actor Rich Swingle will perform his “Beyond the Chariots,” a dramatic interpretation of the later life of Eric Liddell from “Chariots of Fire” during the Olympics in China. The trip kicks off with a performance of the piece at Westchester Chapel Community Church in White Plains, NY on Feb. 23. For more information, go to http://www.richdrama.com/
· Friday is the deadline to register with earlybird savings for the Lillenas Drama Arts Conference in Kansas City April 24-26, 2008. This is one of the best places to get training from some of the top Christian artists around, so don’t miss out! For more information, go to http://www.nph.com/nphweb/html/lcol/index.jsp?nid=qlink.
· Switchfoot concluded its 34-city Appetite for Construction Tour with Relient K and Ruth in Everett Dec. 3 and announced that more than $100,000 had been raised for Habitat for Humanity.
· “A Touch of Encouragement” is a new website from Martha Williamson who was behind the “Touched by an Angel” television series. Check it out at http://blog.beliefnet.com/MarthaWilliamson/
· The two brothers who directed "Facing the Giants" now are working on another cinematic release – "Fireproof," starring Kirk Cameron – about saving a failing marriage. Cameron offers evangelism training in California next April. See http://www.wayofthemaster.com/ for more information.
· The newest fun from Veggie Tales is in theaters with “The Pirates Who Don’t Do Anything.” For the latest on all the movies, check out http://www.christianitytoday.com/movies.
· The April 2008 issue of CCM Magazine will be the last print edition. News will continue online at http://www.ccmmagazine.com/.

Please pray for and support these efforts by Christians reaching out through the arts!
Posted by LaurenYarger at 6:11 AM
Email ThisBlogThis!Share to TwitterShare to FacebookShare to Pinterest

Lauren,
Thanks for including me in this post. Here's a link that will take people directly to the event on the 23rd: http://RichDrama.com/WCCC.