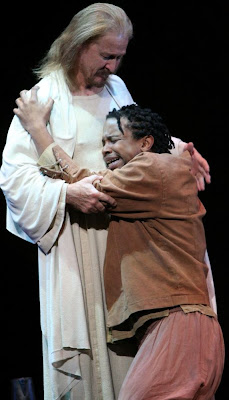 Ted Neely and James Delisco
Jesus Christ Superstar by legendary writing team Andrew Lloyd Webber and Tim Rice, is returning to the Palace Theater in Waterbury, CT for one night only this Wednesday, April 15, at 7:30 pm.
As relevant and timeless as ever, Superstar, the rock opera vision of “the greatest story ever told,” tells the story of the final seven days in the life of Jesus of Nazareth, dramatizing his entry into Jerusalem, the unrest caused by his preaching and popularity, his betrayal by Judas, the trial before Pontius Pilate, and his death.
Ted Neeley, best known for his Golden Globe nominated role as “Jesus” in the Norman Jewison film of Jesus Christ Superstar, headlines this national tour. Tickets for the show start at $25 and can be purchased by phone at 203-755-4700, online at http://www.palacetheaterct.org/, or in person at the Palace Theater Box Office, 100 East Main Street in Waterbury.
Posted by LaurenYarger at 6:00 PM
Email ThisBlogThis!Share to TwitterShare to FacebookShare to Pinterest