﻿
I recently took in the "On Eagles' Wings: The King Kames Bible Turns 400" exhibit at the Museum of Biblical Art in New York City. Though smaller in scope than I had expected (there are after 400 years of history here), the exhibit including various editions of the bible (inclusing a couple of 16th century volumes) is very interesting and is enhanced by some art by Makoto Fujimura, including his beautiful "The Four Holy Gospels" work,
Equally interesting (and for book lovers like myself, perhaps even more so) is an exhibit on the process of making and retsoring ancient books. There are some of the tools and materials used as well as a very informative video. The museum also offers guided audio tours. It's certainly a worthwhile trip if you are in the Lincoln Center area near where the museum is housed on the second floor of the American Bible society on Broadway.
Following is a release from the museaum with information about the exhibit.
--Lauren Yarger
The Museum of Biblical Art (MOBIA) presents On Eagles’ Wings: The King James Bible Turns 400, an exhibition exploring the tumultuous origins and dramatic impact of a literary masterpiece widely considered one of the most celebrated books in the English-speaking world. On view until Oct. 16, 2011, On Eagles’ Wings features more than 130 objects, including more than 50 editions from 1440 through 1999.

These are seldom-seen treasures from one of the largest and finest collections of printed scriptures in the Western hemisphere, the Rare Bible Collection at MOBIA, on long-term loan from the American Bible Society. An influence upon countless authors throughout history, the King James Bible is linked to the writings of such prominent Americans as Abraham Lincoln (1809-1865), Walt Whitman (1819-1892) and Cormac McCarthy (b.1933). MOBIA will also feature five major new works by noted contemporary artist Makoto Fujimura (b. 1960) created to commemorate the anniversary of the King James bible.

On Eagles’ Wings invokes an era when translating the Bible was deadly dangerous. Several of the bibles on display faced destruction, while translators were executed, exiled and excommunicated. During the 16th century – amid the turbulence and conflict of the Reformation and Counter-Reformation – scholars risked their lives to translate the Bible into English. To produce the King James Bible, more than 50 scholars drew upon these early translations. Published in 1611, after seven years, this legendary translation shaped the modern English language, which is peppered with hundreds of phrases from this iconic volume.

―We are excited to participate in this international celebration of the 400th anniversary of the King James Bible,‖ said Dr. Ena Heller, Executive Director of the Museum of Biblical Art. ―The impact of the King James Bible on our culture is incalculable. Visitors to MOBIA can learn about it from every angle – theological, historical, artistic and literary.‖

Manuscript on vellum c. 1440
Wycliffe is credited with producing the first English translation of the entire Bible in the 1380s. Manuscript copies of the Wycliffite Bibles, produced by his followers, were often destroyed. About 250 of these still survive.

Bible with Apocrypha, 1568
This was the official Bible of Queen Elizabeth, revised by a dozen of her most prominent bishops. King James did not suppress or discredit the Bible of his predecessor, but recommended his own team of translators to follow its wording whenever possible. 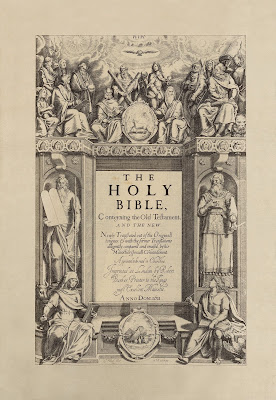 Bible with Apocrypha, 1611 (left)
The first edition of the King James Bible. In the title page, the Sacred Name in Hebrew characters, the Dove of the Holy Spirit and the Lamb of God represent the Trinity. Right in the middle of the Twelve Apostles, Andrew, the patron saint of Scotland, James’ original kingdom, is hugging his X-shaped cross.
Pennyroyal Caxton Press Bible, 1999
Published in Massachusetts and New York to coincide with the new millennium, this two-volume edition on handmade paper has earned a privileged place among the most beautifully printed editions of the King James text. It was both designed and illustrated by Barry Moser (b. 1940), the first major artist to create a complete set of Bible illustrations for a folio volume since Gustave Doré in the 1860s.

Makoto Fujimura
Also on view are five new, large-scale paintings and more than 80 small works by Makoto Fujimura. This original artwork will appear in The Four Holy Gospels, a limited-edition volume commissioned by Crossway Publishing, to be published in January 2012 in commemoration of the 400th anniversary of the King James Bible. Makoto continues the legacy of the illuminated Bible while incorporating images drawn from his abstract contemporary paintings.

An additional component of the exhibition goes behind the scenes to explore the tools, techniques and secrets of conservation. In this tribute to typographers, illustrators, printers, binders, and conservators, visitors will learn the process of binding and rebinding a book; how a letterpress works; and innovative ways printers reused typeset to make attractive yet economical volumes.

Funding
Major support for MOBIA’s exhibitions and programs has been provided by the American Bible Society and by Howard and Roberta Ahmanson. This program is supported, in part, by public funds from the New York City Department of Cultural Affairs, in partnership with the City Council and with public funds from the New York State Council on the Arts, celebrating 50 years of building strong, creative communities in New York’s 62 counties.

About the American Bible Society:

Headquartered in Manhattan, the 195-year-old American Bible Society exists to make the Bible available to every person in a language and format each can understand and afford so all people may experience its life-changing message. One of the nation’s oldest nonprofit organizations, American Bible Society began collecting Scriptures in 1817, only one year after its founding. Through gifts and acquisitions its collection quickly grew. Today, it includes more than 45,000 volumes making it one of the world's largest collections of printed Bibles. Visit www.americanbible.org for more information.
About the Museum of Biblical Art:
Located near Lincoln Center at 1865 Broadway at 61st Street, the Museum of Biblical Art presents critically acclaimed art exhibitions while offering high quality, affordable arts enrichment programs to visitors of all ages. MOBIA celebrates and interprets art related to the Bible and its cultural legacy in Jewish and Christian traditions through exhibitions, education and scholarship. Past exhibitions have ranged from masters of the Italian Renaissance to the art of Marc Chagall. Admission to MOBIA's exhibitions is free for members and children under 12 and pay-what-you-wish for adults, with a suggested admission of $7; Sundays are free. Museum hours are: Tuesday., Wednesday, Friday, Saturday, Sunday from 10 am to 6 pm; Thursday: 10 am to 8 pm. Monday: Closed. Visit www.mobia.org for more information on current exhibits and public programs.

For more information about Fujimura and his work visit http://www.makotofujimura.com/.

﻿﻿﻿﻿﻿﻿
Posted by LaurenYarger at 1:42 PM
Email ThisBlogThis!Share to TwitterShare to FacebookShare to Pinterest