9/11 Anniversary Part 1-- Getting into the City 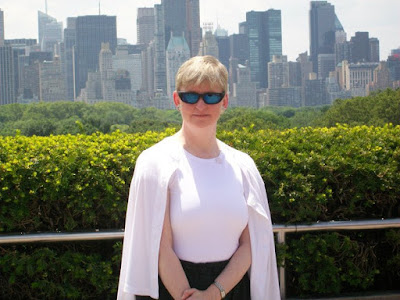 This is the first year since the attack on the World Trade Center that I will be in the city for Sept. 11. Many years, a river of tears and lots of healing, thanks to a gracious and loving God, have passed since that fateful day, and this is the first time I have felt that I might be able to deal emotionally with being here. It also happens to be the 10th anniversary, so there are lots of activities planned to commemorate the event.

Just as I was heading into the city this morning officials announced they are investigating a credible terrorist threat against the city (and/or Washington, DC), possibly with a car bomb.

I avoided areas flooding in Connecticut and bypassed the George Washington Bridge and the tunnels, where traffic was snarled. Increased police presence was being reported at the bridges and tunnels as well as the train stations. Honestly, there always is a police presence in New York. Since 9/11 New Yorkers all have a heightened sense that there still is a threat, but that's part of the reality of living and working in the world's number #1 city. Those who hate America and what it stands for target the cities which most exemplify the nation's ideals and success. So no one here appears to be any more concerned about safety today than any other day. We're always concerned about it.

It is kind of fun watching the tourists stop and gape when they see a show of law enforcement. Those NY cops are impressive and reassuring (and truth be told, the biggest threat to my personal safety this morning came from tourists not watching where they were going.)

Off this afternoon to cover a special concert by the Broadway community to mark the anniversary of the attacks. Stay tuned.
--Lauren Yarger
Posted by LaurenYarger at 2:22 PM
Email ThisBlogThis!Share to TwitterShare to FacebookShare to Pinterest

9/11 terrorism was really a terrible attack made to America. I was not in the place during the time and could not get any better news that details about it, but just the other day, I've seen some photos posted from Yahoo remembering the day. All was a spectacle of a defeated and mourning America. I really wish it would not happen again.