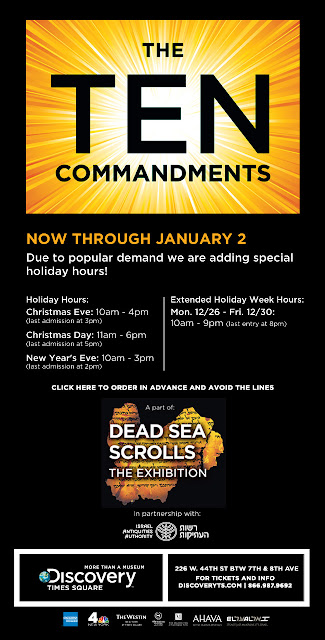 I recently went back to the Discovery Museum's Dead Sea Scrolls Exhibit to view the oldest surviving parchment copy of the Ten Commandments. Totally awesome. Don't miss it.
--Lauren Yarger

The oldest and best preserved parchment manuscript of the Ten Commandments – the rules that are the pillars of morality and law in the Western world and which 3,500 years later were written into the civil and criminal codes of 12 of the original 13 US colonies – will be exhibited in New York City for the first time during the holiday season.

Written in Hebrew around 50 BCE on a parchment that measuresjust over 18 inches by 3 inches, the Ten Commandments Scroll will be on view in the exhibition Dead Sea Scrolls: Life and Faith in Biblical Times at Discovery Times Square through Jan. 2 (the rest of the exhibit continues through continues through April 15 in New York, then moves to the Franklin Institute in Philadelphia).  The narrow strip of  parchment encapsulates and defines how men and women should work and live with each other and their faith in a civil and collaborative society.

The scroll contains text from Deuteronomy 5 and is among the trove of early documents known as the Dead Sea Scrolls, a group ofapproximately 900 manuscripts discovered in a series of caves in the Judeandesert in the late 1940s and 1950s.

Discovery Times Square (DTS) is New York City’s first large-scale exhibition center presenting visitors with limited-run, educational and immersive exhibit experiences It is located at 226 West 44th Street (between Broadway and 8th Avenue).
Posted by LaurenYarger at 11:32 AM
Email ThisBlogThis!Share to TwitterShare to FacebookShare to Pinterest