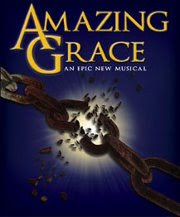 From the theater:
Storms. Slavery. Romance. Redemption. Prepare to be swept away by this epic musical saga about John Newton, a rebellious slave trader, and the woman who never lost faith in him. While fighting the raging seas and his own despair, Newton’s life is suddenly transformed - igniting a quest to end the scourge of slavery. Based on a true story of the man who penned the world’s most recognizable song, it’s a powerful musical you will never forget.

Goodspeed Musicals, the first two-time Tony Award winning theatre in the country, is delighted to announce that the cast of Amazing Grace will be led by Chris Peluso who will play John Newton. Peluso appeared in Broadway’s Mamma Mia!, Lestat, and Assassins.Whitney Bashor will play Mary Catlett. Laiona Michelle will play Nanna/Ayotunde. Mike Evarsite will play Thomas/Keita. Captain Newton will be played by Dennis Parlato of Broadway’s Dirty Rotten Scoundrels, The Sound of Music, Chess, and A Chorus Line as well as Mrs. McThing at Goodspeed’s Norma Terris Theatre.

Major Gray will be played by Chris Hoch of Broadway’s La Cage aux Folles; Shrek The Musical;Spamalot; Dracula, the Musical; and Beauty and the Beast. Hoch also appeared in Goodspeed’s Caraboo, Princess of Javasu at The Norma Terris.

Harriet D. Foy will play The Princess. Ms. Foy appeared in Broadway’s The American Plan, Mamma Mia! and Once on This Island as well as in Goodspeed’s Good Sports at The Norma Terris Theatre.

Tickets: 860-873-8668; www.goodspeed.org.
Posted by LaurenYarger at 3:33 PM
Email ThisBlogThis!Share to TwitterShare to FacebookShare to Pinterest