'Lights Are Bright on Broadway' Award Presented at Irena's Vow 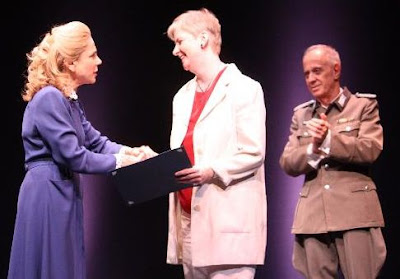 Brad Coolidge photo.
Tovah Fledshuh, left, star of Broadway's Irena's Vow, accepts "The Lights Are Bright on Broadway" Award from Executive Director Lauren Yarger following the matinee performance Saturday at the Walter Kerr Theater. Ms. Felshuh accepted the award on behalf of playwright Dan Gordon, who received the award from Masterwork Productions, Inc for his insightful and moving play about the extraordinary life of Irena Gut Opdyke and the hope and endurance of the human spirit. The play "honors God and is an inspirational portrait of faith," the award read.
Thomas Ryan, right, who plays Major Rugemer, looks on. For a review of the play, which closed its Broadway run last weekend, click here.

The second recipient of a 2009 "The Lights Are Bright on Broadway" Award is Cheryl Cutlip, founder of Project Dance. Ms. Cutlip will receive her award at an upcoming New York event to be announced.
Posted by LaurenYarger at 8:01 AM
Email ThisBlogThis!Share to TwitterShare to FacebookShare to Pinterest