The Theater Year in Review 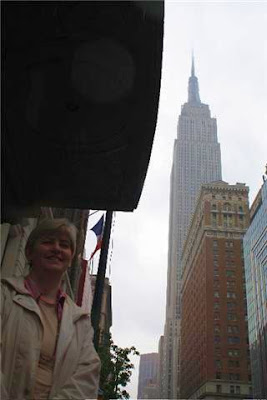 On the way to a show.

God's the Dramatic One....
By Lauren Yarger
No, this isn't a rehash of the shows making up the 2008-2009 Broadway season. It's a reflection of what God has done and what I have learned by reviewing those shows.

To say this has been an amazing year is an understatement. If in April 2008 you would have told me that a year from then, I would be a member of the Drama Desk, The Outer Critics Circle and the American Theater Critics Association, I would have laughed at the absurdity of the thought.

God always has bigger plans for me than I can imagine, however, and He has been opening doors that might otherwise have been shut the whole journey. I find that through the experience, I have had a wonderful opportunity to be a witness for Him and to meet many terrific people who work in the theater industry. God really cares about them and He uses theater and all of the arts amazingly to spark conversation, get people thinking and to reach out with his love.

The theater encourages people and gives artists a chance to use the gifts God has bestowed on them to bring people together, care for each other and show people that they are a part of His extended family. He always seems to find ways to communicate His truths.

I’ve learned, or had confirmed, a lot of other things along the way too and I thought you might enjoy reading them here.

1. New Yorkers are friendly people. Nationwide, they suffer from a reputation that casts them as uncaring, rich snobs, but honestly, everyone I have met in the city has been terrific. If anyone ever needs help, New Yorkers are right there to lend a hand, whether it’s directing tourists to landmarks or to the right subway or helping someone who has tripped and fallen get back up on their feet to resume walking in the busy streets.

2. Broadway’s theaters are beautiful. Each one is different with wonderful architectural details inside and out. They really are treasures.

3. There are a lot of good shows on Broadway and off. Broadway produced more than 40 shows in the 2008-2009 season grossing $943.3 million. Off and Off-off-Broadway shows offered hundreds of more opportunities to see theater. Of the many shows I reviewed (I lost count), most I liked.

4. Press agents are very hard-working people. They seem to work all around the clock and somehow manage to get us all to the right seats at the right show on the right day, most of the time, showing up in person to do it. Amazing.

5. I drove into the city and lived to tell about it. I always have taken mass transit into the city. I’ll drive in any other city (except Washington, DC) but don’t ask me to drive into Manhattan. There’s just something about it that, well, makes me fear for my life. I did have to drive in twice this season and I survived, much to my surprise. But that doesn’t mean I want to do it again. Ever.

6. I can take the subway and not end up in Brooklyn. Prior to this season, I was a cab person for any trips within the city that are too far to walk. The Fringe Festival last summer converted me, very quickly, as it is almost impossible to make it from one venue to the next in time for shows without hopping on the subway. I didn’t end up in Brooklyn, like I had feared I would, even when on a Brooklyn-bound train. I’m now pretty adept at train hopping, and the website HopStop.com has become my best friend, though I still enjoy walking whenever it’s possible.

7. The number 10:22 makes me very happy. This means I have made the early train from Grand Central after a show and will get home at 1:30 am instead of 2:30 am. I love matinees, 90-minute shows with no intermission and Tuesday shows that start at 7.

8. There aren’t enough cheap places to eat in the Broadway district or enough places to sit.

9. The Nederlander Theater has the BEST women’s rest rooms.

10. Mentors are very important. I am blessed to have two: Retta Blaney and Andy Propst, for whom I give thanks daily and without whom, this past year would not have been possible.

Posted by LaurenYarger at 8:30 PM
Email ThisBlogThis!Share to TwitterShare to FacebookShare to Pinterest