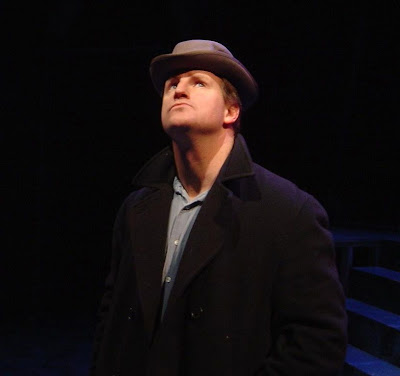 Anthony Lawton
Lantern Theater Company will present Between Heaven and Hell: The Anthony Lawton Festival from Friday, Dec. 3 through Sunday, Dec. 19, offering an alternative to traditional holiday theater with works about spiritual life intended for all audiences – secular or religious.

The three-week festival marks the first time Philadelphia-based actor and playwright Anthony Lawton’s C.S. Lewis and Shel Silverstein adaptations and his original play have been presented in repertory.

The festival will showcase Lawton in solo performances of three plays, opening with the critically acclaimed The Great Divorce (Dec. 3-19), C.S. Lewis' own favorite among his works. The festival continues with The Devil and Billy Markham* (Dec. 8, 11, and 15), written entirely in rhyming couplets by Shel Silverstein, and Lawton’s autobiographical play, Heresy** (Dec. 14, 15, and 18).

The Festival will be held at Lantern Theater Company, located at St. Stephen's Theater at 10th and Ludlow streets in Philadelphia. Tickets are $25-$35; $10 student rush tickets are available 10 minutes before curtain with valid ID; cash only; additional discounts are available for subscribers, seniors, and groups of 10 or more. Tickets are available online at http://www.lanterntheater.org/ or by calling the Lantern Box Office at (215) 829-0395. [A full schedule of festival performances and play descriptions follows below.]

“I first worked with Tony in 1997 on a production of Shakespeare's All's Well the Ends Well, and since that time he has been one of the most important artistic partners for Lantern Theater Company and for me personally,” says the Lantern’s Artistic Director, Charles McMahon. “A big part of what makes theater worthwhile is that we get to discuss very interesting ideas with very interesting people, and then find creative and compelling ways to put those ideas on stage. Tony's whole approach to theater and storytelling is to enliven the mind and heart. The work is sometimes funny and sometimes challenging and it always makes you leave the theater feeling more expansive and alive than you felt when you came in. The Lantern is dedicated to an authentic and intimate exploration of mysteries of the human spirit, and Tony's work is right in line with that.”

Lawton has acted professionally since 1992 and has appeared on many stages throughout the Philadelphia region, including at the Lantern in productions such as The Lonesome West, Othello, and The Screwtape Letters, among others.

In 1998, Lawton founded the Mirror Theatre Company, which performs solo and small-cast plays. The mission of the Mirror is “Spiritual Theatre for a Secular Audience.” Lawton says he sees his plays as “part of an ongoing dialogue with the audience – a dialogue in which we discuss and consider that which is (or isn't!) Eternal in us.”

In discussing his inspiration for this mission, Lawton says, “When I first started studying acting, I realized that the impulse was an entirely selfish one. I was interested in attention and accolades. I wanted to offer something to audiences – to address spiritual concerns, and to foster a dialogue between orthodox and unorthodox audience members.”

Information: (215) 829-0395 or visit http://www.lanterntheater.org/. Running Time: All plays are approximately 90 minutes with no intermission.

* This play includes themes of sacrifice and redemption and is unapologetically and joyously profane. Parental guidance advised for audience members under 17.
**This play contains profanity, frank discussions of sex, and ideas that some may consider to be blasphemous. Children under 17 not admitted.
Posted by LaurenYarger at 8:09 PM
Email ThisBlogThis!Share to TwitterShare to FacebookShare to Pinterest