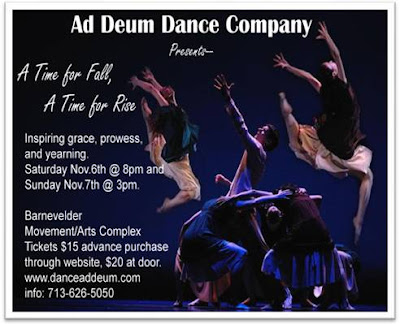 Company member Christina Schanta will debut her work Into The Sun which follows people in different stages of emotion, ranging from apathy to intensity and culminating in exultation. It's about the emotional choices we make in community when walking through life together. Melissa Brading, former dancer of Ad Deum now dancing in New York, will premiere her new work Just Keep Driving which explores the question Why do we keep pushing forward? Is it because of pressure from family, God or just the desire of success? Do we even know why we do what we do? This piece does not look to answer these questions, but asks you to contemplate them.

Steve Rooks, former principal dancer with The Martha Graham Dance Company will present two works, Gomer, a stirring solo for dancer Shizu Yasuda based on the biblical account of a woman’s redemption from the book of Hosea, and Rwandan Cry, dedicated to a young Rwandan woman who witnessed the massacre of her family while literally having to dance for her own life before her killers.

Artistic Director Randall Flinn will bring to the stage his new work Unconfined, a four-part piece that explores the suppression of freedom of a village, nation and culture and the longing of it’s inhabitants to break away from prescription and discover the joy of true liberation.

Ad Deum News: Ad Deum recently returned from Guadalajara, Mexico as one of two international guest companies to be invited by The Ministry of Culture to perform for the 13th Annual Festival Internacional De Danza. The company was overwhelmingly received by both their audiences and the Ministry of Culture represenatives. One incredible testimony from one of our performances was a young man coming up to us in tears and telling us how the beauty and liberty of our dancing made him decide that very evening not to end his life, as he was consideriing suicide due to great unhappiiness. He said the dances we presented and “the spirit upon them” made him realize there was purpose in life and that God gives liberty to the soul. You can only imagine how impacted we were by this. The Ministry of Culture has welcomed us back to perform in their biggest theatre and to also perform in hospitals, orphanages and nursing homes. We are so very humbled and thankful!
Posted by LaurenYarger at 1:37 PM No comments:
Email ThisBlogThis!Share to TwitterShare to FacebookShare to Pinterest

A note to our subscribers:

On Nov. 1, 2010 we will be switching the way theater review posts are distributed from the Reflections in the Light website. If you receive an email (like this one) each time we post a new review, you'll need to resubscribe, as the old contacts won't switch over to the new system. Subscriptions in blog readers will continue as before.

To subscribe, send an email to reviews@masterworkproductions.org with "reviews" in the subject line. You'll receive an email when there is a post and if we post more than one review in a day, you'll receive just one email containing all of them.

Don't miss out on reviews of all the great Broadway and Off-Broadway shows opening this season. Once the new system goes into effect, you won't receive the emails unless you subscribe at this new address.

For the latest reviews including Edward Albee's Me, Myself & I, Mrs. Warren's Profession starring Cherry Jones and The Pitmen Painters, visit http://reflectionsinthelight.blogspot.com.

Reviews will be up this week for A Life in the Theatre with Patrick Stewart and T.R. Knight, The Language Archive and La Bete with David Hyde Pierce, Joanna Lumley and Mark Rylance.
Posted by LaurenYarger at 3:46 PM No comments:
Email ThisBlogThis!Share to TwitterShare to FacebookShare to Pinterest

How Well Do You Know Your Religion?

Atheists and agnostics, Jews and Mormons are among the highest-scoring groups on a new survey of religious knowledge by the Pew Research Center's Forum on Religion & Public Life, outperforming evangelical Protestants, mainline Protestants and Catholics on questions about the core teachings, history and leading figures of major world religions.

On questions about Christianity (including the bible), Mormons and white evangelical Protestants show the highest levels of knowledge. Jews, atheists and agnostics stand out for their knowledge of world religions, including Buddhism, Hinduism and Judaism. Jews, atheists and agnostics also do particularly well on questions about the role of religion in public life, including what the U.S. Constitution says about religion.

While previous surveys by the Pew Research Center have shown that America is among the most religious of the world's developed nations, this survey shows that large numbers of Americans are not well informed about the tenets, practices, history and leading figures of major faith traditions—including their own. Many people also think that the constitutional restrictions on religion in public schools are stricter than they really are.

These are among the key findings of the "U.S. Religious Knowledge Survey," a nationwide poll conducted from May 19 through June 6, 2010, among 3,412 adults.

• More than four-in-ten Catholics (45%) do not know that their church teaches that the bread and wine used in Communion do not merely symbolize, but actually become, the body and blood of Christ

• About half of Protestants (53%) cannot correctly identify Martin Luther as the person whose writings and actions inspired the Protestant Reformation, which made their religion a separate branch of Christianity

• Roughly four-in-ten Jews (43%) do not recognize that Maimonides, one of the most venerated rabbis in history, was Jewish

• Fewer than half of Americans (47%) know that the Dalai Lama is Buddhist; fewer than four-in-ten (38%) correctly identify Vishnu and Shiva with Hinduism; and only about a quarter of all Americans (27%) know that most people in Indonesia are Muslims

• Most Americans are able to correctly answer at least half of the survey's questions about the Bible. Roughly seven-in-ten (71%) know that, according to the Bible, Jesus was born in Bethlehem. More than six-in-ten (63%) can correctly name Genesis as the first book of the Bible.

Data from the survey indicate that educational attainment—how much schooling an individual has completed—is the single best predictor of religious knowledge. On average, college graduates answered nearly eight more questions correctly than those with a high school education or less. Religious knowledge is also higher among those who have taken a religion course in college. Other factors linked with religious knowledge include reading Scripture at least once a week and talking about religion with friends and family.

For those curious about their own religious knowledge, the online presentation of the "U.S. Religious Knowledge Survey" includes an interactive quiz that allows Web visitors to answer a selection of questions taken from the survey and compare their results to the nation as a whole and with various religious and demographic groups.

In conjunction with the release of the survey, WGBH in Boston will debut "God in America," a six-hour series that interweaves documentary footage, historical dramatization and interviews to explore the historical role of religion in the US, including its impact on society, politics and culture. initially it airs tonight and tomorrow.

The Pew Research Center's Forum on Religion & Public Life conducts surveys, demographic analyses and other social science research on important aspects of religion and public life in the U.S. and around the world. As part of the Washington-based Pew Research Center, a nonpartisan, nonadvocacy organization, the Pew Forum does not take positions on any of the issues it covers or on policy debates.
Posted by LaurenYarger at 12:36 PM No comments:
Email ThisBlogThis!Share to TwitterShare to FacebookShare to Pinterest 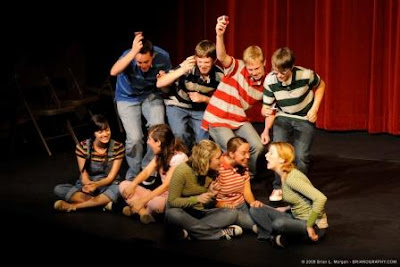 The purpose of the Festival is to give high school theatre students an opportunity to sharpen their skills through competitions, interact with colleges and audition/interview for scholarships and programs at the College Fair, and to be encouraged by Christians working in the theatre. Students in public, private and home school settings are invited to attend.

■Events include: solo and duo monologues, musical and dramatic group scenes, and more.
■Interact with hundreds of other Christian theatre artists and students from around the US and meet college theatre program representatives.
■Teachers/parents: an opportunity to fellowship, workshop and network with your peers.

Berky is a master of mime and improvisation, clowning and suspense. Jaudes appeared for five years on Broadway as Jennyanydots, the tap-dancing Gumbie Cat in the hit musical Cats.

"TRANSITIONS: Merging the Blessings of Change with the Blessings of Heritage in the Local Church" is the topic at Vision New England's annual ministry celebration Thursday, Nov. 4 from 6:30 to 8:30 pm at Wyndham Hotel in Andover, MA. The featured speaker will be Gordon MacDonald.

The gathering of the organization, which helps churches with evangelization in New England, will include:
-- Accounts of what God is doing across New England
-- A View of The Way Forward
-- Musical Selections from Guest Musicians
-- Dinner & Fellowship
-- An offering

Posted by LaurenYarger at 12:34 PM No comments:
Email ThisBlogThis!Share to TwitterShare to FacebookShare to Pinterest

Opportunities for Artists at Redeemer

Redeemer Presbyterian in New York City offers a number of ongoing ministries and events for artists. This year's theme centers around "what it means to allow the Gospel to change our hearts, our communities and our world."

Coming up:
Beginning Oct. 15 with for the Beauty of the Church with Gordon Fee, quarterly InterArts Fellowship will explore six themes in which
discussions will be rooted

For information about these and other programs for artists at Redeemer, visit http://www.faithandwork.org/arts.
Posted by LaurenYarger at 12:32 PM No comments:
Email ThisBlogThis!Share to TwitterShare to FacebookShare to Pinterest
Newer Posts Older Posts Home
Subscribe to: Posts (Atom)