“Mark is an experienced leader in the Christian publishing market, and we are thrilled to have him at the helm of our newly expanded Christian division,” said Murray. “The new division adds further scale and balance to HarperCollins overall portfolio, and Mark will work closely with the leadership teams of HarperCollins, Thomas Nelson and Zondervan to build on the individual strengths of each company.”

“I am grateful to Scott for his leadership and professionalism during his tenure with Zondervan. He has achieved everything I asked him to achieve at Zondervan during a most challenging time in the company’s history,” Murray continued.

Schoenwald has been with Thomas Nelson since 2004 when he joined as Chief Sales Officer. In 2009, he was promoted to president of the company and in 2011 named CEO. Under Schoenwald’s leadership, Thomas Nelson has seen both double digit revenue and operating income growth, as well as had several titles make the “New York Times” Bestsellers list, including Heaven is for Real and Jesus Calling. Prior to joining Thomas Nelson he served as President of several prestigious home décor, garden and gift companies. He began his career at Lenox Brands, serving in various sales, marketing and operations positions.

“I feel blessed to have the opportunity to lead the Christian publishing division for HarperCollins Publishers,” said Schoenwald. “I am fortunate to move into this role with the benefit of a strong foundation to build on, coupled with many talented people on both teams. I anticipate a smooth transition as we begin to work together, optimizing all strengths to create an even more successful publishing program for these two distinct brands which, combined, have 300 years of publishing experience and history.”

Schoenwald will remain based in Nashville, Tenn., and will spend part of his time in Grand Rapids, Mich., where Zondervan will continue to operate from its current location. The two companies have different, though complementary, missions and both will continue to acquire and publish books specific to those missions, competing as they have in the past, but collaborating where appropriate.
Posted by LaurenYarger at 3:09 PM No comments:
Email ThisBlogThis!Share to TwitterShare to FacebookShare to Pinterest 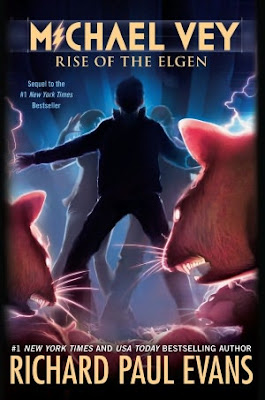 Teens, parents, teachers and community leaders concerned with the dark and violent content in today's popular young adult novels can find an alternative in the second installment of the Michael Vey series by Richard Paul Evans ("The Christmas Box"): "Michael Vey 2: The Rise of the Elgen."


Last year, the first book of the Michael Vey series was an overwhelming success, reaching #1 on NY Times Bestseller List (Teen Fiction).
ABOUT THE BOOK


Michael was born with special electrical powers—and he’s not the only one. His friend Taylor has them too, and so do other kids around the world. With Michael’s friend Ostin, a techno-genius, they form the Electroclan, an alliance meant to protect them from a powerful group, the growing Order of Elgen, who are out to destroy them. The leader of the Elgen, Dr. Hatch, has kidnapped Michael’s mother, and time is running out.


After narrowly escaping an Elgen trap, Ostin’s discovery of bizarre “rat fires” in South America leads the gang to the jungles of Peru, where the Electroclan meets new, powerful foes and faces their greatest challenge yet as Michael learns the extent of the Elgen’s rise in power—and the truth of their plan to “restructure” the world.


Evans is the winner of the American Mothers Book Award, two first place Storytelling World Awards for his children’s books, the Romantic Times Best Women’s Novel of the Year Award, and two Wilber Awards for Fiction.  Evans received the Washington Times Humanitarian of the Century Award and the Volunteers of America National Empathy Award for his work helping abused children.


WEBSITE: Visit the official site to watch the trailer, sign up for updates and download a discussion guide at: http://www.michaelvey.com.  BUY THE BOOK: Amazon or Barnes and Noble.
Posted by LaurenYarger at 5:15 PM No comments:
Email ThisBlogThis!Share to TwitterShare to FacebookShare to Pinterest
Newer Posts Older Posts Home
Subscribe to: Posts (Atom)