Playwright Catherine Trieschmann and Discovery Times Square are winners of the 2012 "The Lights Are Bright on Broadway" Awards, given annually by Masterwork Productions, Inc. to recognize individuals and organizations making a difference in the Broadway theater community through faith.
Trieschmann is being honored for her play, How the World Began, which ran Off Broadway this season at The Women's Project in association with South Coast Repertory. It is an intelligent examination of the science vs. creation argument explored from both sides of the issue and prompts debate and discussion among theatergoers. You can read the review by clicking here.

Discovery Times Square is being honored for its Dead Sea Scrolls exhibit which featured a number of the scrolls, including the oldest surviving copy of the Ten Commandments, artifacts and a stone from the western wall in Jerusalem on which museum patrons were encouraged to leave notes of prayer. It was presented with the cooperation of The Israeli Antiquities Authority.

"How the World Began breathed new life into a timely debate," said Lauren Yarger, executive director of Masterwork Productions. "Ms. Trieschmann creates complex, likable characters who are opposed on the issues, but very respectful of each other as people."

"The Dead Sea Scrolls exhibit was a real treat," she continued. "It doesn't get much more literal about bringing the Word of God to the theater district and the museum did so in a way that was meaningful to believers while being interesting to those who had no religious connection to the scrolls. The exhibit also was respectful of all faiths."

Carl Cricco, director of marketing at Running Subway Productions will accept the award for Discovery Times Square. Presentation of the award to Treischmann has not been set.

The Women's Project  in New York, Julie Crosby, producing artistic director, is the nation's oldest and largest company dedicated to producing and promoting theater created by women. Discovery Times Square is is the destination for discovery through unique exhibits in New York. Masterwork Productions, Inc. is a Christian performing arts organization offering the only resource for professional Broadway theater reviews with added information about language and content at Reflections in the Light. 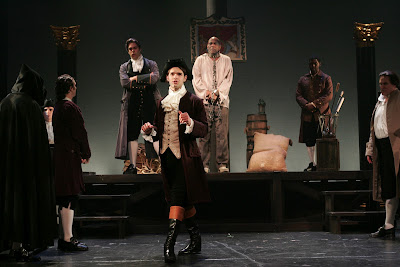 The cast of Amazing Grace. Photo: Diane Sobolewski
Epic Tale of Slavery and Grace Eyes the Great White Way
By Lauren Yarger
It's a love story weaved between the threads of slavery, forgiveness and faith and though everyone is familiar with the hymn that grew out of it, no one has tried to put the epic tale on the stage before. Until now.

Amazing Grace is getting a run at Goodspeed Musicals' developmental Norma Terris Theatre in Chester, CT with an eye toward hitting Broadway. This might seem like a lofty goal given the large scale of  the production in a struggling economy that has producers holding on tightly to their investment dollars  (even smaller musicals can cost tens of millions of dollars to produce in New York). And the material is religious to boot (religious-themed shows have a hard time getting favorable reviews on the Great White Way.) Given the nothing-short-of-miraculous journey of the musical, so far, however, all things may be possible.
﻿ 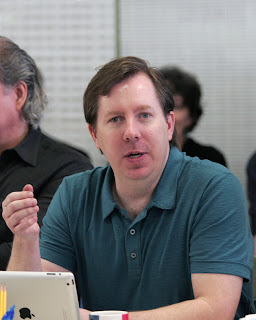 The musical is the creative baby of Christopher Smith, right, a soft-spoken Warwick, PA resident who as a teen had taught himself to play the guitar by watching video tapes. Music provided an escape from a difficult home: his parents divorced and his mother struggled with depression. He wrote a lot of folk music and listened to a lot of music videos. He found that music started to "build pictures" in his head and that he could "feel" how the music should sound.
He attended Catholic schools, but "didn't believe in much of anything" until he was 17 when he met up with a youth director who invited him to join the group at his church.

"I was a nerdy kid who didn't get along with anyone, but these people loved me even when I was a dork."

The experience led him to start attending their Presbyterian church and a personal faith in God. In 1996, helping with a youth activity for the church, he picked up a children's book about John Newton, the writer of the Amazing Grace hymn, and his passions of music and faith fused.

Some research revealed that no one before had focused a stage musical on Newton, the 18th-century slave trader who came to faith, became a clergyman and strongly supported the abolitionist movement in England. He would do it, he decided, despite the facts that he never had written anything for the theater and doesn't actually read music.

"Daybreak," one of the songs included in Amazing Grace, actually is the third song he ever composed.

"I wrote from the heart years ago," then years later, his wife suggested that the tune would be  perfect for Amazing Grace.

He continued working on the musical off and on for about 10 years, knowing that it had "all the stuff of good drama."

"It has a a personal story of redemption about a man who has made mistakes and comes through tumultuous circumstances," he said, drawing comparisons to Les Mis.

Finally, in 2006, he mentioned the work to a musician friend in Bucks County, PA who was excited by the project and encouraged Smith to show it to others. Smith borrowed some music composing  software from his brother and created an overture (you can listen to it here, along with other selections form the score). He went to offices and homes to tell the story, sing songs and drum up interest in the project.

"The first half million dollars came from right inside Buck's County," he said.

Smith set up a reading at a Baptist church which could seat 600 people and had to find room for 1,200 who showed up. A second reading was set up for New York in the Empire State Building. Attending was Carolyn Rossi Copeland, founder of the former Lamb's Theater in Times Square, and producer of successful shows like Smoke on the Mountain, Gifts of the Magi, Johnny Pye, Roads to Home and Freud's Last Session, about an imaginary meeting between Sigmund Freud and C.S. Lewis, which currently is enjoying a long Off-Broadway run.


"I went begrudgingly at first," said the producer who says she gets pitched anything with a religious connection because of her time with the Lambs, which was affiliated with the Nazarene Church. Once she heard the music, she was glad she went.
The story, however, needed development, she thought. Smith had stuck close to historic facts and focused on the love story between Newton and his childhood sweetheart Mary Catlett (Smith drew upon his own relationship with his wife, Alana, who was his own high school sweetheart, to create a strong character for Mary, about whom not much is known).

Copeland felt that this story was as much the slaves’ as it was Newton's. She suggested bringing in Arthur Giron as a mentor. He eventually came on as co-writer of the book They added slaves as prominent characters and tell part of the tale from their point of view.  The rewrites have continued through the developmental run at Goodspeed where producer Michael P. Price's input and perspective have been invaluable, Smith said. Audience feedback following some performances is helpful too.

Gabriel Barre directs. The creative team includes choreographer Benoit-Swan Pouffer, Music Director Jodie Moore, Set Designer Beowulf Boritt and Costume Designer Toni-Leslie James.
"There are parts of Amazing Grace that are hard for me to watch," Smith said referring to the depiction of slavery, but he felt strongly about not "Disneyfying" that aspect of the story. "More than 27 million are in bondage today."

So is Broadway ready for an epic musical Goodspeed advertises as "Storms. Slavery. Romance. Redemption?"

Copeland and Smith think so, perhaps following a national tour.

Smith, who defines his own faith as broadminded and not defined by extremism, says the message in the musical is not religious, or preachy, but one which can appeal to everyone.

"It is written into our DNA that we want to be loved in spite of our failures," he said. Amazing Grace is about that (the beautiful tune "Nothing There to Love" puts this sentiment into a soul-touching ballad) and the fact that suffering matters, that people can go beyond perceived limits.

"We're trying to give the audience something so basic to the human heart that everyone will get it."

Apparently they are. The Box Office has done strong business and Copeland reported that the opening-night crowd lept to their feet at the final curtain with people talking about how moving they had found the show.