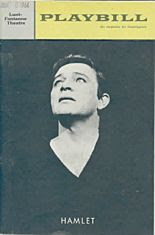 In 1964, Broadway was treated to a momentous production of Shakespeare's Hamlet, directed by legendary actor Sir John Gielgud and starring Richard Burton. For this historical production, actor Richard Sterne, who was also in the play, secretly tape-recorded much of the rehearsal process. He would later use these recordings to pen his critically applauded book "John Gielgud Directs Richard Burton in Hamlet."

Refreshments will be served. A $10 donation is suggested. All profits from EAG events go directly to the guild's Emergency Aid & Relief Program which provides assistance to actors who find themselves out of work.

For more information about the EAG click here.
Posted by LaurenYarger at 4:36 PM
Email ThisBlogThis!Share to TwitterShare to FacebookShare to Pinterest