I Was Lost in the Woods, but Now Am Found 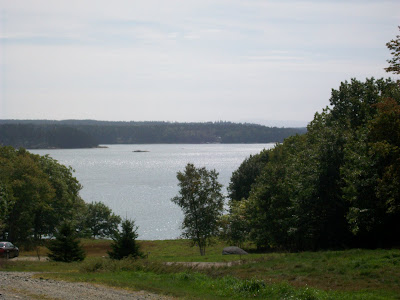 By Lauren Yarger
I recently got to revisit the spot where I met the Lord on heavily wooded Deer Isle, Maine where I had been a camp counselor more than 30 years ago. My purpose in going to Les Chalet Francais, as the camp was called, was to teach girls age 5 to 12 French and tennis, but I left with a different and life-changing one: to serve God.

It's hard to explain how a hostile, anti-God, anti-religion, Jesus-was-just-a-hoax believing person can change into a follower of Christ. You sort of have to be there, and if you're in any of the categories I just described, you won't believe it's possible until you are there yourself. It did happen, just not over night. Meeting God at that camp was the result of many months of study (mostly with the intention of disproving his existence) and a major battle of the will (not wills, because God never forces us to believe). I was fighting with myself, unwilling to give up control. Until I finally admitted that maybe I didn't know absolutely everything thing there was to know in the world, and perhaps -- and this was the hardest part --that it was possible I could be wrong about a few things, I really wasn't ready, or able, to see God standing right in front of me.

It's amazing what isolation can do, though. Overwhelmed by the endless solitude and more trees than I ever had seen in my life (I was from the city) I was unable to hide behind the routines and problems of a daily life that kept me so busy they didn't allow me to stop and hear God's voice. Instead, I found myself quite alone one day there at the camp, and quite miserable. I took a good, hard, long look at my life and didn't like what I saw. I realized, reluctantly, that what God offered, through the death of Christ on the cross was what I needed. Suddenly I wasn't alone. God was with me and because I asked him to guide my life, he never has left me since.

Recently I had an opportunity to vacation a couple of hours away and I determined to revisit, for the first time, the place of my spiritual birth. Where better to conduct a mid-life crisis review of my life? 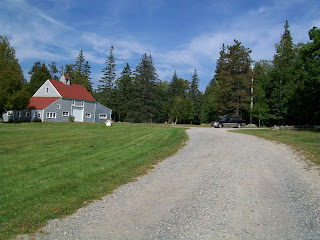 Finding the place would be no easy task, however, as the camp had been sold and divided into residential lots many years ago. The local Chamber of Commerce reported that a number of private homes had been built on the property and other sources said that none of the buildings except a storage shack still stood. So I set off with my map of the area and a prayer for direction. I hadn't driven while I was at the camp, so no landmarks or roads would seem familiar to me.

After arriving at what I thought was a main road that would wind around the camp site, I was greeted by a fork in some pretty deep woods. Taking my best guess, I headed left and soon realized I was driving into someone's private road which dead-ended in front of me. I started to turn around, but when I looked left, I recognized the view. It was the same as it had been all those years ago, except for a few newer trees between me and the bay which stretched out at the bottom of the hill.

I doubted myself for a minute, though, because to see this view, I would have to be just about where the main building for the camp was, and my car was next to an older building that couldn't have been erected after the camp was sold and, after all, a bunch of trees overlooking a bay can look the same from many different vantage points to a city girl. Just then a car pulled up and the property owner politely inquired what I was doing there. I apologized for my Google map, which had promised a through street, but which instead had landed me in her drive, and explained that I was looking for the French camp.

I had found it, she informed me. The main lodge had been converted into a storage barn with an apartment, which is why I didn't recognize it, and a little further down the road, another camp building, the dance studio, had been converted into a residence. As this gracious woman continued to give me some history about the place, we discovered we had been instructors at the camp the same summer. We both only had been there that one summer. Now what are the odds, do you think, that a woman who had been there only at the time when I had met God happened to buy this property and also just happened to be driving home at the exact moment I had arrived to revisit the site? Some 30 years ago, I believed in coincidence and chance. Today I saw an answered prayer and God's handiwork.

My friend invited me to walk around and take photos. As God and I stood in one place, I could see the exact spot where we had met, just a little to our right. Much had changed since that day when I'd gone into the woods alone, but some things never do. I still have to battle with wanting to be in control and it's still hard to admit that I might not be right about everything, but at least now, when I leave behind daily routines and problems to contemplate what I should do with my life, my heavenly father walks into the woods with me.
Posted by LaurenYarger at 5:43 AM
Email ThisBlogThis!Share to TwitterShare to FacebookShare to Pinterest