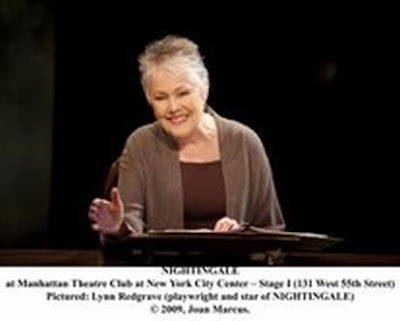 Acting legend Lynn Redgrave, 67, who appeared Off Broadway this season in Nightingale, a one-woman show she penned, based loosely on the life of her grandmother, passed away last night at her Connecticut home. Her children, Ben, Pema, and Annabel, and close friends were at her side.

In a statement, her children said, “Our beloved mother Lynn Rachel passed away peacefully after a seven year journey with breast cancer. She lived, loved and worked harder than ever before. The endless memories she created as a mother, grandmother, writer, actor and friend will sustain us for the rest of our lives. Our entire family asks for privacy through this difficult time.”
In addition to her children, Lynn Redgrave is survived by six grandchildren, her sister Vanessa, and four nieces and nephews.

Redgrave was the moving speaker at this seasons' Broadway Blessing held at the Cathedral of St. John the Divine. She spoke about how her faith had helped her through her illness. Retta Blaney, director of the event has posted some thoughts about Redgrave on her blog here.

Broadway theaters will dim their lights tomorrow. A private funeral with be held later this week.
Posted by LaurenYarger at 6:30 PM
Email ThisBlogThis!Share to TwitterShare to FacebookShare to Pinterest