News from the world of Christian books with information from the publishers: 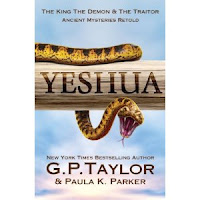 Due out March 1-- "YESHUA: The King, The Demon and The Traitor" (Authentic Media ) by G.P. Taylor and Paula K. Parker.  The book takes readers back to witness the life of one man whose birth changed the course of history forever.

With vivid descriptions and historic details, these stories clothe the characters with flesh and bone, laughter and tears, love and pain, excitement and anger. The scenes and settings paint the ancient world with the grit and dust of Palestine alongside the opulence and decadence of the Roman Empire. Throughout it all, these stories honour the truth of the ancient book from which the narratives were drawn.

YESHUA will captivate the imagination of a generation that is perhaps more familiar with Hogwarts and Mt Olympus than Galilee and Jerusalem with these retellings of stories from the world’s all-time bestselling book.

The Shroud of Turin is one of the most famous relics in the world. Scrutinized by scientists and studied by debunkers, it also is honored around the globe by countless faithful devoted to the mysterious image of a crucified man that appears on the cloth.
In "The True Icon," available from Ignatius Press, German investigative reporter and bestselling author Paul Badde travels from the Holy Sepulchre in Jerusalem through Europe tracing the history and travels of what arguably is the most-investigated piece of cloth in human history. Along the way, he notes that the rediscovery of another ancient piece of cloth — the Holy Veil of Manoppello – actually answers questions that have kept some from acknowledging the Shroud as the cloth Joseph of Arimathea used to wrap Christ’s body for burial.

“The Shroud is an icon written in blood; the blood of a man who was scourged, crowned with thorns, crucified and whose right side was pierced,” said Pope Benedict XVI. “The image impressed upon the Shroud is that of a dead man, but the blood speaks of his life. Every trace of blood speaks of love and of life.”
In this lavishly illustrated new book, Badde analyzes the reporting in the Gospels that suggests the Shroud and Holy Veil not only are “the real deal,” but that they found their way to the East and, ultimately, to Europe through the hands of the true witnesses to Jesus’ walk on Earth — the Apostles.
“I doubt — frankly — a lot of things,” Badde writes in the book. “I doubt the latest news, I doubt my telephone bills and many prescriptions, and so on, but not that the Shroud of Turin accommodated Jesus of Nazareth after his death for two nights and a Sabbath.”

He reports on the chain of Shroud ownership through the ages, uncovering some fascinating twists and turns in the cloth’s path from the tomb described in the Gospels to Turin. In the process, he also offers readers a brief introduction to the Holy Veil of Manoppello, believed to be “the napkin” included in the Gospel of John report on Jesus’ resurrection.

Badde provided an extensive look at the Holy Veil in his bestselling "The Face of God," published in English by Ignatius Press in 2010.
This time, however, the Shroud is his focus; and Badde uses the same investigative tools to provide new insights into the well-known relics.
You can order it here http://www.amazon.com/True-Icon-Shroud-Turin-Manoppello/dp/1586175912/ref=sr_1_1?s=books&ie=UTF8&qid=1329255179&sr=1-1.
Posted by LaurenYarger at 4:33 PM
Email ThisBlogThis!Share to TwitterShare to FacebookShare to Pinterest