"I know Corbin Bleu has a special affinity for GODSPELL, and with his great talent, charisma, and radiant energy, I know he will be terrific in the show," said Stephen Schwartz. "I am very much looking forward to working with him and seeing him as our new Jesus."

Bleu made his Broadway stage debut in 2010 as the lead character, bodega-owner Usnavi, in the critically acclaimed musical In the Heights.

In March 2009, he released his second studio album, Speed of Light (Hollywood Records), a collaboration with some of the top producers and writers in the industry including Eric Hudson (Kanye West, Jennifer Hudson), Claude Kelly (Akon, Michael Jackson) and Brian Kennedy (Rihanna). He co-wrote the songs "Moments that Matter" and "Champion" with Claude Kelly (both tracks produced by Eric Hudson).

His debut solo album Another Side was released in May 2007. The album featured the hit single "Push it to the Limit" from the film Jump In! His single "Run It Back Again," from the Disney Channel Original Movie "Minutemen," became one of the top 10 downloaded songs on iTunes. Bleu performed material from "Another Side during" his North America tours in 2007 and 2008. He was subsequently nominated for a 2008 NAACP Image Award for Best New Artist.

He is the national spokesperson for the Starlight Children's Foundation and is also involved with St. Jude's Children's Hospital and the Make-a-Wish. 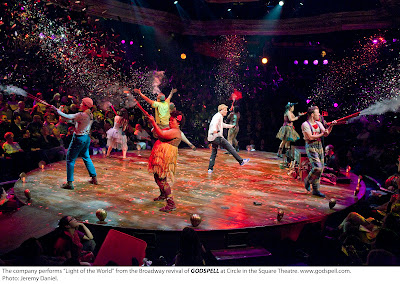 Posted by LaurenYarger at 3:04 PM
Email ThisBlogThis!Share to TwitterShare to FacebookShare to Pinterest