Book Review: As One Devil to Another by Richard Platt 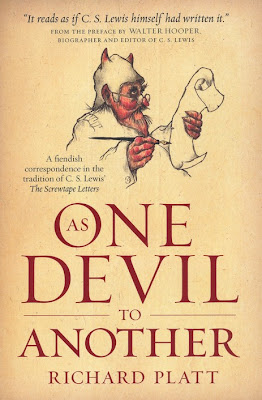 Playing Devil's Advocate
By Lauren Yarger
Fans of Uncle Screwtape will enjoy a new incarnation of the devilishly clever correspondence between a demon and his prodigy in Richard Platt's "As One Devil to Another: A Fiendish Correspondence in the Tradition of C. S. Lewis' The Screwtape Letters" (Tyndale, 2012).
Platt's debut novel casts Slashreap as the newly appointed Departmental Head for Young Tempter Development who coaches, through a series of letters, his star pupil and nephew, Scardagger.
Slashreap mentors the up-and-coming tempter of humans away from God and his truth (enhanced by drawings throughout the book by Larry Peterson.) While I wouldn't go so far to say that the language of  "As One Devil to Another" is indistinguishable from Lewis' classic (like Lewis expert Walter Hooper claims in his preface), I would recommend it simply for all of the great "truths" and sage advice contained in the text.
"We convince our clients that the way of the Adversary is too hard, or better still, impossible, without ever letting them to try it, " Slashreap writes. Some other points that have you nodding in understanding about how the enemy seeks to deceive:
"The real show is on the other side of death. You must keep this horrible truth from your client at all costs. Teach her that the only reality is under her pretty nose. Human blindness can be very advantageous to us."
"We have corrupted the institution (universities) at its very core, making it one of the most fertile grounds I know for planting, through competitive friction, the seeds that will grow into a delightful garden of envy, pride, anger and covetousness, for which university members such as your client will not even feel shame, because competition is as much a part of her environment as the air she breathes."

(Pharisaical) people can be so useful to the cause of Hell. They will spend their lives arguing about questions of high theology for which they have neither the intellectual equipment nor the education, meanwhile neglecting the obvious tasks before them."
"A small, but vocal minority proclaims that something which is manifestly preposterous is indisputably true -- that jewel-encrusted rhinoceros dung is Art, for example. Then they shout down opposing views and bludgeon them into silence, demonstrating that argument is useless against them, and personally attacking anyone remaining who dares to speak the truth. Art then becomes anything the artist -- or his agent or promoter -- says it is. Raise the price and it becomes Great Art. Raise t yet again and it is 'profpund."
These little gems are all throughout the correspondence and is a thought-provoking piece, just like its predecessor. This work reads more like a blunt commentary on modern culture and society than Lewis', where the commentary is more veiled in the revelation of how the devil controls our minds. This is entertaining and insightful in its own way.

You can purchase the book here. See a trailer here.
We have a certificate to give away for a free copy of this book. For a chance to win, send an email to info@masterworkproductions.org with "Book Giveaway" in the subject line by midnight, Wednesday, July 18, 2012. Include your name and address in the body of the email. All those entering will be included in a drawing for the certificate,  redeemable at participating Christian bookstores by Aug. 1, 2012. Winner will be notified by email on Thursday, July 19.
Posted by LaurenYarger at 11:17 AM
Email ThisBlogThis!Share to TwitterShare to FacebookShare to Pinterest