Christians, Church, God in the Spotlight on NY Stages 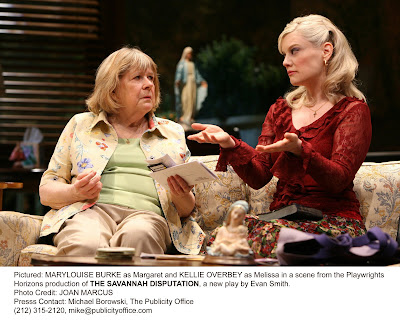 Christians, church and God suddenly are turning up as main characters in shows on New York stages and for the most part, the treatments are part of a balanced debate on Christian and conservative issues.

Works offering a conservative viewpoint don't exactly abound on Broadway, Off-Broadway or at regional theater across the nation -- a situation explored some months ago in a widely discussed piece in the New York Times (read it here). There are a few reasons for this, I believe.

First, an overwhelming majority of the folks deciding what ends up on stage, writing the shows and music or penning reviews that decide which shows are hits or flops, come from a liberal, non Christian viewpoint. This doesn't mean they're not talented or nice people. They are. It just means that it's unlikely conservative or pro-Christian messages are a priority for them.

Second, Christians walked away from theater (and most everything labeled "arts") years ago because they didn't want to be associated with "worldly" influences. The result, however, was that they gave up a chance to have any influence themselves. It's only in the last 15 years or so that Christians and churches have embraced the arts as something gifted by God and as a tool for outreach (music and the movies have a head start on theater in this regard).

Third, Christians and conservative views aren't always welcome in the theater community. Take the fallout a few months back when Scott Eckern, artistic director of the California Music Theater, supported California's Proposition 8 banning same sex marriages. Eckern, a Morman, made a personal donation, in support of the campaign. Soon the entire theater community nationwide was outraged that anyone working in the theater would be opposed to the rights of gays who work in and support the theater. Actors threatened to boycott the theater; producers refused to allow their shows to take stage there; others threatened the theater with action against its tax exempt status for allowing its artistic director to have political view, even though it was personal and not connected officially to the theater at all. As a result, Eckern resigned.

So you have to wonder whether the theater community really is concerned about the lack of conservative options, as decried in that Times article. That's why the recent addition of three Off-Broadway shows offering a Christian "side" to some issues, without the Christians coming off looking like a bunch of bible-thumping, hateful zealots, is very encouraging.

Avow, by Bill C. Davis at the 45th Street Theatre, is a fairly even-handed look at the issue of gay marriage in the church. Read the review here. The Savannah Disputation by Evan Smith over at Playwright's Horizons, explores the idea of evangelism in a humorous script with terrific performances (that's a preview of the review which will post here tomorrow after the show's official opening tonight.) In addition, The Civilians present a really well done musical, This Beautiful City at the Vineyard Theater, about the efforts to establish Colorado Springs as the "evangelical Capital" of the world and the downfall of some Christian leaders like Ted Haggard (the review for this show should be posted later today at http://reflectionsinthelight.blogspot.com.)

All three of these shows are great conversation starters. God's at work on the stages of New York theaters.
-- Lauren Yarger

Posted by LaurenYarger at 8:40 AM
Email ThisBlogThis!Share to TwitterShare to FacebookShare to Pinterest