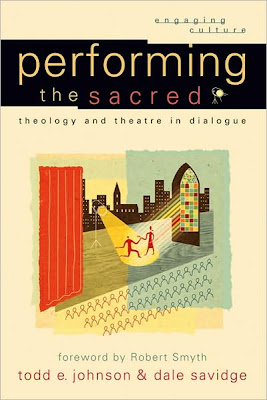 An Engaging Dialogue About Church, Theater
By Jerry Starks
Have you ever been around two people who know and appreciate different aspects of the same activity? Maybe one is a florist and the other a landscaper, or one likes playing soccer and the other likes coaching it. You can get a wide perspective very quickly just by listening to them talk about their activity.

"Performing the Sacred" by Todd E. Johnson and Dale Savidge (Baker Academic 2009) is a dialogue between two people who love and understand both theater and theology. Johnson is the William K. and Delores S. Brehm Associate Professor of Worship, Theology and the Arts at Fuller Theological Seminary. He is an ordained minister in the Evangelical Covenant Church and the editor of "The Conviction of Things Not Seen." Savidge is the executive director and founding member of Christians in Theatre Arts (CITA). He is professor of theatre and chair of the theatre arts department at North Greenville University and has traveled the world as a theater artist. Their conversation (they alternated writing chapters in the book) covers a lot of territory, but by the end I was challenged and encouraged.

Three concepts are the anchors of their discussion: Incarnation, Community, and Presence. Christians will recognize these ideas in terms of theology, applying to our relationship with Jesus and with others. However Johnson and Savidge point out that the three are also fundamental to theater and describe the relationship between the author and the actors and the audience.

Establishing background for a discussion is usually difficult, and I found the first chapter, “A survey of Christianity and Theatre in history,” a little dry. But plow through it (or skip it) because the rest of the book is very engaging. Both authors provide examples from unusual theatrical events, such as Todd’s description of a “play” he attended that took place in the front seat of a Delta 88 driving around the streets of Chicago, while the audience of four was in the back seat. With that backdrop, he then begins a discussion of Presence, both in relationship to theater and in relationship to God.

With the ease of familiarity the authors make observations about church and theater that might disturb some Christians. Then they turn around and make other observations that would startle many non-Christians involved in the theatrical arts: theater is more Incarnational, depends more on Community and is more Present than any other art form. The very fact that it is a performance and not a recording echoes the reality that life is temporary. Because of the interaction between the author, the actors, and the audience, theatre is a very Trinitarian experience. These are the kinds of ideas that bubble forth in the dialogue.

“Well then, why bother going to church if you can experience the presence of the divine in theater?” The authors address the problem honestly. What good (to the Church) is theater if it doesn’t evangelize? Acting is fundamentally dishonest (lying); so how can that honor God? Why should we expose our minds to all the junk that’s on the modern stage? Hard questions are explored with integrity, and I was very pleased by the absence of pat answers. In that way, reading this book is similar to reading a book by Philip Yancey.

The final chapter is written as a conversation between the two authors and it’s the kind of conversation I’d love to participate in. It’s not just a review of the contents of the book: it’s an example of them in context and in action.

"Performing The Sacred" is not a quick, easy read, (the book is published with an academic market in mind), but it is a very worthwhile read. It raises significant issues for any Christian who is interested in theater arts, and it gives a well-thought-out basis from which you can start building your answers.

The book is part of the Engaging Culture series designed to help Christians respond with theological discernment to our contemporary culture. Each volume explores particular cultural expressions, seeking to discover God’s presence in the world and to involve readers in sympathetic dialogue and active discipleship.

To purchase this book (and support Christians in Theatre Arts) click here.

Jerry Starks is associate director of Masterwork Productions, Inc. and has numerous acting and directing credits in both secular and Christian productions. He resides in Essex Junction, VT where he is active in the arts ministry at his church.
Posted by LaurenYarger at 7:30 AM
Email ThisBlogThis!Share to TwitterShare to FacebookShare to Pinterest