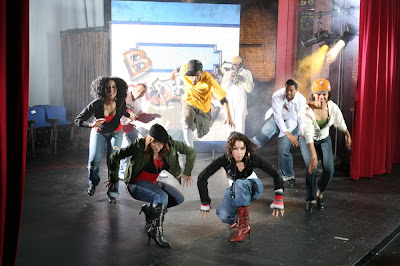 Produced by Grimes and Cheryl Cutlip, founder of the Times Square based dance ministry Project Dance, the evening is billed as a “blast from the past phenomenon” restoring the spirit of entertainment.

The recent show, inspired by performers who spontaneously entertain in Broadway’s underground, the subway, also featured BU Band, Tadah Dance Company and vocalist Annaleigh Ashford. After a two hour program, featuring several numbers choreographed by Grimes, audience members were invited to join the performers on stage for an open session.

Two video screens on either side of the stage provided views of the action, including the fancy footwork not readily visible to those seated at tables further from the stage. Audience members ranging from the young to the not-so-young enjoyed the burst of raw energy and joy on the stage.

The show is presented periodically. Check back here and we’ll list details of the next show.

--Lauren Yarger
Christians might also like to know:
• Part of the room in which the show is presented at BB King’s contains a bar where folks gather behind the cabaret tables. Though there are ties to Christians and Christian organizations, the evening does not include an overt “Christian message.” The content is appropriate for all ages.
Posted by LaurenYarger at 1:29 PM
Email ThisBlogThis!Share to TwitterShare to FacebookShare to Pinterest

Hello thank you so much for starting this blog. As Christian artist, we need all the inspiration that we can get. Thank you for your labor of love.