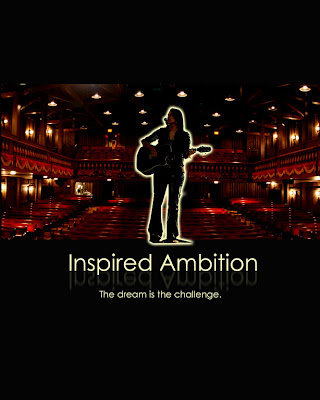 Insired Ambition is a television series that follows Masterwork Productions artist Erica Lane as she takes her shot as an artist in the Christian music industry.

Ever want to know what it is like to try for your big break? The struggles, frustrations, joys and triumphs that take place? Well, look no further.

Told from the perspective of an ex-school teacher who left the comfort zone of the classroom for the trials and testing of the music industry, Inspired Amition reminds us that life is full of obstacles, but that anything is possible through Christ who strengthens us. The series will be available on DVD Aug. 11. Join the Facebook page here.

A selfless soul, Erica remains true to her heart as she seamlessly combines her ministry with her artistry in this captivating series. Each of the episodes features a different part of her journey.

The reality style series produced by Cloud Ten Pictures features 13 episodes that are each 30 minutes in length. The footage was shot across the United States between August 2007 and November 2008. Produced by the Saylors Brothers and directed by award winning filmmaker Kyle Saylors, this series is something every music fan will enjoy.

During the journey, Erica is blessed to have one on one time with top music artists and others involved in Christian media, ministry and music.

For more information about Erica and her music, go to http://www.ericalanemusic.com. Sign up for her newsletter at http://ericalanemusic.net63.net/ and get free downloads of her music!

To book Erica, contact us at masterworkproductions@yahoo.com.
Posted by LaurenYarger at 9:59 AM
Email ThisBlogThis!Share to TwitterShare to FacebookShare to Pinterest