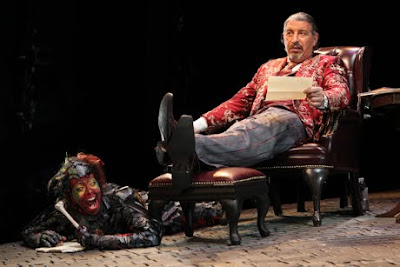 Karen Eleanor Wight at Toadpipe and Max McLean as Screwtape.
Photo courtesy of Fellowship for the Performing Arts.

The Art of Spiritual Warfare, One Show at a Time
By Lauren Yarger
As Christians, most of us try to avoid the temptations of hell and trust that a personal relationship with Christ will keep us from ever having to experience its torments in person, but actor Max McLean is a regular visitor to the place eight times a week, sometimes twice a day, and he relishes the experience.

OK, so it’s not really hell. It‘s Cameron Anderson's set design for The Screwtape Letters, playing at New York’s Westside Theatre, but for 90 minutes, McLean, who stars as Screwtape, and his untrustworthy demon sidekick, Toadpipe (played by Karen Eleanor Wight), recreate some hellish --and witty -- scenarios that give a glimpse into the enemy’s strategy to lead humans away from God and down the path to hell.

McLean has been bringing C.S. Lewis’ chief demon to life for some time now. The production started in New York in 2006, then toured to a number of cities across the country including sold-out runs in Chicago and Washington, DC where the creative team fined tuned it in preparation for its current Off-Broadway run.

“It was always the plan: to learn along the way and bring it back to New York,” McLean said.

Bringing the Lewis classic to life was no easy task. McLean collaborated on the script with Jeffrey Fiske, who also directs, to condense the piece into something that would work on stage while retaining the author’s voice and words.

“We had to find a way to make it understandable so people could get it the first time without having to think about it,” McLean said.

He first had been exposed to C.S. Lewis shortly after becoming a Christian in his 20s. “Surprised by Joy” was over his head, he admits, but in “The Screwtape Letters,” he recognized himself in the first chapter.

The writing team received the rights to create a stage adaptation from Lewis' estate in 2005 and began crafting an “oral speech” script for Screwtape, still one of the author's best known works (along with the Narnia series and “Mere Christianity.”)

“We knew if we did the piece right, it would pay dividends,” McLean said.

They enhanced the character of Screwtape (McLean’s portrayal skillfully ranges from diplomatic statesman to human-flesh-hungry devourer) and amplified the demon’s techniques for temptation.

They didn’t want Screwtape trapped behind a desk writing letters for the duration, so they added Toadpipe, who makes a “cameo” appearance in the book, to interact with him. Wight, vibrantly costumed by Michael Bevins, actually doesn’t have any lines, but communicates through a series of grunts. Her background in pantomime and improv enhances the performance, which earned her the 2008 DC Theatre Scene Award for Best Female Actor.

In the play, Screwtape offers advice and suggestions to his nephew, Wormwood, a junior demon, who has been assigned his first human subject. Each missive concludes with “Your Affectionate Uncle, Screwtape,” sealed with the crackling of brimstone and hastily posted by Toadpipe via a suction tube post box connecting the hellish headquarters with the world above.

So is it difficult embodying a demon who worships “our father below” and refers to God as “the enemy?”

“I’m sad to say,” McLean repsponds with a guilty laugh, “I love playing him.” The joy comes from the message of Lewis’ words and the knowledge that they are affecting people who see the show.

Indeed, there are several points in the show when group “aaaahs” and “hmmmms” can be heard as folks recognize the schemes of the devil. McLean has had "ah ha" moments himself sometimes during his daily personal devotional times when he discovers that he has been the victim of the same techniques (like distracting humans with food) he employs as Screwtape while on stage.

Because everyone can relate to the humans being tempted, the play has been enjoyed by people from all religious and cultural backgrounds. Spiritual warfare and art, it seems, are things we all understand, just like McLean was able to relate to the book even though his faith was very new.

We all have knowledge of God that we repress and art hits imagination, where that knowledge rests, he said.

“If you do art well, you’ll get good results.”

Good doesn’t begin to describe the show, which has received very favorable reviews from critics where it has toured and in New York, as well as from audiences.

Those surveyed consistently call the show “smart, witty and funny.”

Mostly what he hopes he’ll hear audiences say after seeing the show is, “Could this be true?”

“If they ask that question, we’ve done our job,” he said.

So what’s next? He and Fiske are working on a four-character stage adaptation of “The Great Divorce,” also by Lewis.

For a review of the production of The Screwtape Letters running at the Westside Theatre, 407 West 43rd St., NYC, click here. For tickets, and more information about McLean and his Fellowship for the Performing Arts company, visit http://www.fpatheatre.com/screwtape.

Posted by LaurenYarger at 8:45 PM
Email ThisBlogThis!Share to TwitterShare to FacebookShare to Pinterest