In celebration of the release of the Delirious? Farewell Show live DVD/bluray/2CD, lead singer Martin Smith will auction three stage suits/ jackets that he has worn live during the last few years of touring with the Christian rock band. All profits from the auctions will go to CompassionArt, creating freedom from poverty through charitable projects around the world.

Martin’s grey suit [seen above] features in the Delirious live DVD ‘My Soul Sings – Live from Colombia’ – it is the suit that he is wearing in the DVD, and in the cover artwork. He wore this suit at concerts around the world, including when the band played to hundreds of thousands of people in India as you can see in the stage photo. This photo also shows the word ‘Komfort’ on the back of the jacket, which is word created from the title of the band’s last studio album ‘Kingdom of Comfort’. Bid on the grey jacet here. 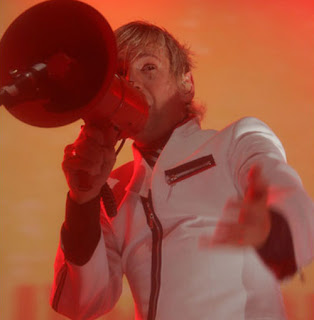 Martin’s white suit (left) was used extensively during The Mission Bell tour in the UK in 2006 and the Worship Revolution Tour in the USA in 2007. The band had each white suit specially made, with red trimmings and features. Martin’s suit has a red zipped vent in each sleeve, and red zip crosses on the back of the jacket and the sides of the trousers. Bid on the white suit here.

Martin wore the black and red military-style jacket below during the band’s final UK and Europe tour in November 2009. Consequently, it is featured in the Delirious ‘Farewell Show’ live DVD and Blu-ray that has just been released in 2010. On the back of the jacket is sown a gold ‘History Maker’ logo that was the theme of the final tour and the name of the Greatest Hits albums released in 2009. Bid on the red and black suit here.

The auction will close on the 8th of July (see ebay for time). Bids can only be accepted through ebay, and the auctions are subject to ebay's terms and conditions. 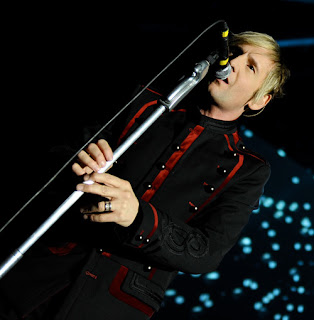 Posted by LaurenYarger at 9:35 AM
Email ThisBlogThis!Share to TwitterShare to FacebookShare to Pinterest