Dead Sea Scrolls, Stone from the Western Wall on Display in Times Square

Take in hundreds of artifacts, watch videos, touch a part of the Western Wall in Jerusalem and be amazed at some of the earliest surviving copies of scripture.

The exhibit, made possible with the cooperation of The Israeli Antiquities Authority, which shares some of the nation's treasures, is comprehensive and contains something of interest for everyone.

I enjoyed viewing in person the scrolls, which during my studies after having been an atheist who scoffed at Christianity and the bible, were a part of what helped show me the truth of God's word. Other interesting artifacts, like a kitchen pantry, a bath tub, glass items, jewelry and coins prove that the ancient times don't seem all that different from today. There's even an ancient official's stamp with the name of Netanyahu, which sat on the desk of Israel Prime Minister Benjamin Netanyahu before being included in the Discovery display. 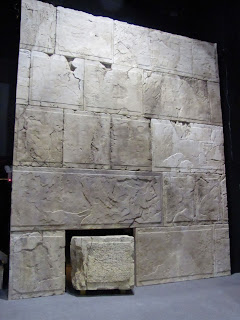 Very moving, also, is a three-ton stone from the Western Wall (left). Visitors are encouraged to leave notes of prayer which will be sent to the actual wall in Jerusalem, which can be viewed in live time on a video screen nearby.

The scrolls themselves are displayed on a circular kind of table. They are enclosed in a climate controlled viewing area with information, a translation and high-resolution photos providing better detail displayed on the surface. Audio tours also are available.

--A scroll with portions of the last six chapters of Leviticus, including the precepts commanding observance of the New Year Festival (Rosh Hashanah) and the Day of Atonement (Yom Kippur).
--Scroll fragments containing a portion of Deuteronomy 32 known as the "Song of Moses," a poem Moses recites on the eve of his death. Some 32 copies, representing nearly every chapter of the book, were discovered in total. 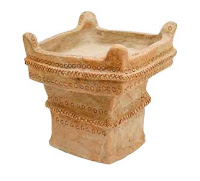 --A Pottery Four-Horned Altar from Hazar (around 10 CE) with ash spots remaining from incense burned in it. (The exhibit uses CE for Common Era instead of the less politically correct Before Christ/After Christ BC/AD designations).
For the kids, there is an interactive scroll with the Ten Commandments (as well as plenty of video stimulation. They will enjoy watching restorers trying to remove Scotch Tape, incredibly used to hold the scroll fragments together after they first were discovered). Exhibition areas also offer quotes from non-biblical ancient texts, displays of Judaic and Islamic art and artifacts and the six ossuaries, found in a tomb in Jerusalem, possibly inscribed with the names "Jesus," "Mary," "Joseph" which got so much media attention when they were discovered recently.

The exhibit, opens Friday at Discovery Times Square, 226 West 44th St., NYC. and continues through April 15. It then  moves to the Franklin Institute in Philadelphia in May. Tickets are $25 for adults, $22.50 for seniors and $19.50 for children. Hours are 10 am to 8 pm, with the last entry 60 minutes prior to closing. For more information, visit http://www.discoverytsx.com/exhibitions/dead-sea-scrolls.

This exhibition is created by the Israel Antiquities Authority (IAA) from the collections of the Israel National Treasures and produced by Discovery Times Square and The Franklin Institute. The exhibition is curated by Dr. Risa Levitt Kohn (Professor at San Diego State University) and Debora Ben Ami (Iron Age collection curator at the IAA). Planning and design by Ralph Appelbaum Associates, New York, NY and consultation by noted Dead Sea Scrolls expert, Dr. Lawrence Schiffman (Vice-Provost of Undergraduate Education, Yeshiva University).
Some Frequently Asked Questions About the Dead Sea Scrolls

What are the Dead Sea Scrolls?
Ancient manuscripts that were discovered between 1947 and 1956 in 11 caves near Khirbet Qumran, on the northwestern shores of the Dead Sea in Israel.

How many scrolls were found?

Over 100,000 fragments of text were discovered, and scholars have pieced these together into over 900 separate documents.

What is the significance of the Dead Sea Scrolls?

The Dead Sea Scrolls are widely acknowledged to be among the greatest archaeological treasures linking us to the ancient Middle East, and to the formative years of Judaism and Christianity. Over 200 biblical manuscripts are more than a thousand years older than any previously known copies of the Hebrew Bible. In addition, there are scrolls that appear to represent a distinct form of Judaism that did not survive the Roman destruction of the second Temple in 70 CE. These "sectarian scrolls" reveal a fascinating stage of transition between the ancient religion of the Bible and Rabbinic Judaism, as well as the faith that would become the world's largest, Christianity.

What material are Dead Sea Scrolls made of?

The majority of the scrolls are written on leather parchment, but there are also some texts written on papyrus (reed paper). One scroll, known as the Copper Scroll is inscribed upon copper.

In what languages have the Dead Sea Scrolls been written?

Who wrote the Dead Sea Scrolls?

Many, but by no means all scholars believe the scrolls were created by the Essene sect, a group of Jews who broke away from mainstream Judaism to live a communal life in the desert. When the Romans invaded their community around 68 CE, the Essenes hid the manuscripts in nearby caves. The ruins of Qumran, near the base of the caves, are believed by many to be the communal quarters of the Essenes. However, some scholars believe the Essenes were not the only authors of the scrolls; they assume that some of the manuscripts were written in Jerusalem and later deposited in the caves at Qumran when the Romans threatened Jerusalem.

What kind of texts are the Dead Sea Scrolls?

The manuscripts fall into three major categories: biblical, apocryphal, and sectarian. The biblical manuscripts comprise some 200 copies of biblical books, representing the earliest evidence for the biblical text in the world. Among the apocryphal manuscripts (works that were not included in the biblical canon) are works that had previously been known only in translation, or that had not been known at all. The sectarian manuscripts reflect a wide variety of literary genres: biblical commentary, religious legal writings, liturgical (prayer) texts, and compositions that predict a coming apocalypse.

Where are the Dead Sea Scrolls now?

The majority of the scrolls are housed in Israel under the care and custody of the Israel Antiquities Authority (eight manuscripts at the Shrine of the Book and all others at the IAA State Collections). There are also some scrolls in Jordan and in Europe.

Posted by LaurenYarger at 6:18 PM
Email ThisBlogThis!Share to TwitterShare to FacebookShare to Pinterest