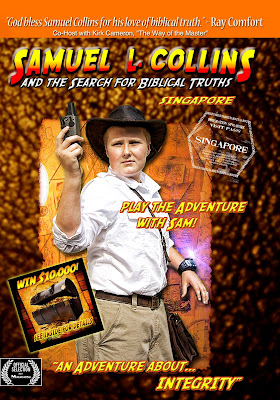 This DVD series combines the fun adventure of a "Young Raiders of the Lost Ark," the high-tech gadgetry of "Mission Impossible" and the scriptural conviction of "Bibleman" in "Samuel L. Collins and The Search for Biblical Truths," a new product line designed to reach Christian children and tweens.
In each half-hour episode created by Linda Vista Pictures, 13-year-old Samuel pursues top-secret clues to solve encrypted cipher codes which reveal biblical truths. The young viewer becomes actively engaged as he’s invited to find clues hidden throughout the show and in the special features section. In the process, he will "own" the same, just-revealed biblical truth.
Ray Comfort, author of "Hell’s Best Kept Secret" and co-host of "The Way of the Master" with Kirk Cameron, has endorsed the 13-part series after watching the first episode, shot entirely in the exotic locale of Singapore, and which spotlights the Christian virtue of integrity, .
Future shows will be filmed in Bali, Berlin, India, Egypt, the Grand Canyon, Philadelphia, and Washington, D.C. And Samuel will track down clues as he discovers the Biblical truth about self-control, leadership, the first and second commandments, being free in Christ, overcoming sibling rivalry, and creation.
"As I looked throughout the Christian marketplace as a mother, I saw a gaping hole in the entertainment genre after the children grow out of Larry the Cucumber of 'Veggie Tales,'" said Kristi Collins, mom and writer with Linda Vista Pictures. "We thought it was time that 6- to 12 year olds could finally have a role model who was an actual boy from an actual family who dealt with real-life challenges from a biblical perspective."
Whether the young viewer decodes the clue by learning how to use a cipher or participating in geocaching, there’s nothing passive about this new line of 13 DVDs. And when they’re actively engaged in learning, God will begin to transform them from the inside out, the producers say.
Beyond the fun of deciphering clues and solving puzzles in the DVD’s, the children and tweens will be invited to participate in separate contests at www.SearchForBiblicalTruths.com where they can qualify to win dozens of prizes like ciphers, t-shirts, hats, pens, and action figures as well as the $10,000 Grand Prize.
"My greatest desire would be that children watching at home would learn that they can learn how to biblically reason and come to a godly conclusion," said 13-year-old Samuel Collins, the star of the series.
Posted by LaurenYarger at 5:23 PM
Email ThisBlogThis!Share to TwitterShare to FacebookShare to Pinterest

Great idea to enriched the knowledge of Christianity and christian art with fun in kids ..