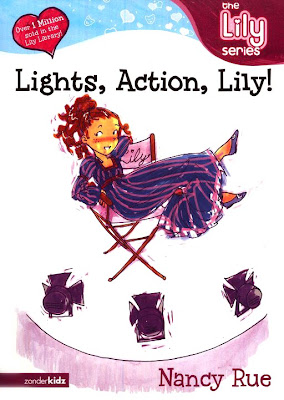 A Fun Look at Pre-Teen Drama
By Jerry Starks
Middle school: cliques, social rivalry, and the beginnings of romantic interest. Into this bubbling pot, add a drama activity and you’ve got… “Lights, Action, Lily!” (Zonderkidz 2002). Author Nancy Rue captures many of the issues of pre-teen joy and sorrow in this fun story.

The book opens with the school children lining up for their class pictures. Shad, Lily’s personal nemesis, grins at Lily and she scowls at him just as the camera takes her picture. Not a good start to the day.

Bickering in the hallway between Lily and Shad is interrupted by Mrs. Reinhold, the English teacher, who asks Lily to meet her at lunch time. At lunch time, instead of detention Lily is offered the chance to be in a drama competition with a group of other students. They are to do some scenes from Shakespeare, and Lily is thrilled.

When the group meets for the first time, Lily finds all the students are seventh graders, and the only other sixth grader is Shad. Believing he must be there by mistake, she’s shocked that Mrs. Reinhold actually invited him. Horror is added to horror when it turns out that she and Shad are to do a scene from “The Taming of the Shrew” together. She’s appalled, but becomes determined to show him up as a fool.

As the story continues, Lily develops a grudging respect for Shad as an actor, and actually begins to enjoy their scene. Meanwhile, Ashley, who is Shad’s girlfriend, is threatening death and destruction to Lily for coming between her and Shad. Ashley eventually stages a scene of her own where she frames Shad and nearly gets him suspended and therefore unable to participate in the drama competition.

The seventh-grade members of the Shakespeare Club are annoyed at having to put up with the two younger kids. When nobody else came up with a theme to hold all the scenes together, Lily’s idea was glumly accepted and covertly ridiculed.

Against all odds, Shad learns his lines and is magnificent, Lily enjoys working with Shad, and everything looks successful. Then two days before the competition, Lily gets sick, and the doctor says there’s no possibility of her participating in the competition. A tiny bit of comfort is that her friend, Kresha, has been helping her learn lines and is familiar enough with the script that she can stand in for Lily. Even through her dismay, Lily is genuinely happy for Kresha, and happy for Shad being able to compete after all.
Sick and miserable at missing the competition, Lily is startled when the whole drama team comes to her house to celebrate their victory.

Ms. Rue’s characters felt very real to me. She did a good job of portraying pre-teen angst and gently introducing Biblical morality and behavior into the story. In a very deft twist of plot, when Lily sees the picture taken at the beginning of the story, she’s at a place where she recognizes how unattractive she is when she scowls, and decides she needs to change her outlook and behavior. Other positive messages include not being intimidated by bullies, being willing to change your opinion of someone, and the value of friendship. I thought the ending scene when all the members of the Shakespeare Club show enthusiastic approval of Lily and gratitude for her ideas… well, that was the most unrealistic part of the story for me. Success doesn’t always change people from being disdainful to being appreciative. That being said, “Lights, Action, Lily!” is still a good read for young readers.

Jerry Starks is associate director of Masterwork Productions, Inc. and has numerous acting and directing credits in both secular and Christian productions. He resides in Essex Junction, VT where he is active in the arts ministry at his church.
Posted by LaurenYarger at 9:46 AM
Email ThisBlogThis!Share to TwitterShare to FacebookShare to Pinterest